On January 24, 2007, US Senator Norm Coleman from Minnesota wrote to a Falun Gong practitioner concerning the Chinese Communist Party (CCP)'s atrocity of organ harvesting from Falun Gong practitioners in China. Senator Coleman said in the letter: "As a firm advocate of human rights, I pledge my continued support for those in China who have been deprived of their essential liberties and freedoms." Below is the text of the letter.

Thank you for contacting me in regards to the persecution of Falun Gong practitioners in the People's Republic of China (PRC). As a firm advocate of human rights, I pledge my continued support for those in China who have been deprived of their essential liberties and freedoms.

In March 2006, Falun Gong representatives in the U.S. claimed that thousands of practitioners had been thrown in Chinese concentration camps, where they were slain for profit through the sale of their harvested organs. China has vehemently denied that there is any substance to these reports. Officials from the U.S. Embassy in Beijing and the U.S. consulate in Shenyang have conducted some investigations at one particular location and found no evidence that the location was being used for organ harvesting.

I have shared your concerns about Chinese organ harvesting with the State Department and have received assurances that they will continue to rigorously investigate these allegations. The State Department has long called on China to "respect freedom of thought, conscience and religion, to allow all persons to practice their religious faiths freely, and to end the cycle of oppression on Falun Gong."

On June 12, 2006, the House approved H. Res. 608 by a vote of 363-1. H. Res. 608, introduced by Rep. Thaddeus McCotter (R-MI), condemns the escalating levels of religious persecution in China and expresses the sense of the House of Representatives that U.S. policy should promote and defend religious freedom and freedom of conscience in China. I have also examined a resolution, introduced by Rep. Christopher Smith (R-NJ), condemning Chinese human rights abuses and calling on China to end its persecution on the Falun Gong (H. Res. 794). With 28 co-sponsors, H. Res. 794 passed in the House on June 12, 2006. If similar legislation should appear in the Senate, please know that I will give it my full consideration.

As a member of the Senate Foreign Relations Committee and co-founder of the bipartisan Senate China Working Group, I will continue to press China on these issues of serious concern, and will work to ensure that China honors its international commitments to fair trade, religious freedom, and human rights, as I did on my recent trip to China in August.

Thank you once again for contacting me. If I may be of further assistance to you in the future, please do not hesitate to contact me again. 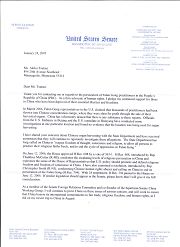 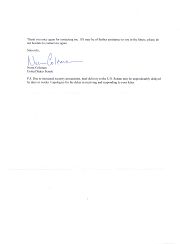