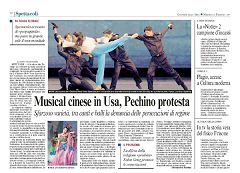 With the headline "Chinese New Year Spectacular was protested against by the CCP in Beijing," this article pointed out that the Spectacular alleged by the Chinese Communist regime as being a propaganda show stunt has been well received during its world tour. Though the Chinese Communist Party (CCP) has striven to block the show, it surprisingly created the opposite effect. In a short span of only four years, the Chinese New Year Spectacular has transformed from an unknown music dancing show only viewed by a small number of Chinese Americans into a popular show with the tickets priced at up to US$180. The successful performance at New York Radio City Music Hall was highly acclaimed and ushered in the prelude to its world tour. The show is being performed in about thirty major cities including Vancouver, Paris, Sydney, Berlin, etc.

The article reported that the spectacular, with a live orchestra of forty five musicians and over one hundred and fifty dancers, singers and actors, is magnificent. All the actors and actresses donned splendid ancient Chinese costumes, while the stage backdrop showed a Buddhist temple, the Great Wall and the Great Mongolian Pastures. The show displays China's five thousand year history and civilization.

Behind the magnificent show, a strong message was communicated: The Chinese Communist regime's persecution against Falun Gong should end. In a dance scene, a group of Chinese policemen in uniform with a huge sickle on their backs relentlessly tortured a Falun Gong practitioner to death and afterwards they were avenged by supernatural deities. In another scene called "Candlelight Vigil," which was dedicated to all the children who were orphaned, dancers donned white clothes (the white color is representative of death in Chinese society) and the backdrop was a tomb composed of a number of lighted candles.

According to The Epoch Times newspaper in the United States, to interfere with the show the Chinese Communist regime had mobilized numerous people to dial the hot-line of the booking office at New York Radio City Music Hall, trying to paralyze the system.

Last week, the South Korean media harshly criticized their government for its decision to cancel the show in the National Theater of Korea in Seoul just a few days before the planned performance date, owing to the Chinese Communist regime's threat of taking action against South Korea's economic interests.

“Praise for the Sage”