(Clearwisdom.net) On January 22, 2007, ten young practitioners and one adult practitioner started a six-day car tour from Sydney to Broken Hill. With their pure hearts, they called on more Australian officials and the public to pay attention to the persecution of Falun Gong in China and help rescue the orphans of those practitioners tortured to death by the CCP. Newspapers, TV and radio stations along the way interviewed practitioners and covered the tour. 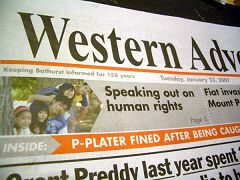 interviewed the young practitioners and reported the event under the title "Speaking out on human rights".

From the initiation to the planning of the car tour, the young practitioners took care of everything. Who are they? Why did they do this? What did they experience? I interviewed several of them. Here are their stories.

We experienced many tribulations in the preparation. First we could not find a practitioner to drive. On the evening before we started the trip, the practitioner who agreed to drive us was unable to join the trip. But we believed that all problems would be solved. We immediately looked for an alternative driver.

We were told that one of the cars had brake problems and running too hot every half an hour. We sent forth righteous thoughts and the car did not have any problem the whole trip.

We had an appointment with an editor of a newspaper in the first city we reached. During the appointment, most of the young practitioners were uneasy and tired because we had got up at 5 a.m. Some of them did not know what to tell the media since they joined the car tour for the first time. When the editor asked to take a photo, everyone walked out to the parking lot. Some of them started to talk and exchange phone numbers outdoors. Our driver went to buy coffee. A practitioner was sent to look for him, but no one knew his whereabouts. When the editor was ready to take a photo, all the practitioners returned.

When we contacted city councils on our way, many people were worried about the drought in recent years. However, rain started on the third day of our car tour. It was a miracle because it had not rained for several years. When we met a reporter, she asked to take a photo outdoors. We told her it was raining. She was surprised, "Really?" and felt that was impossible. .

We arrived at Broken Hill on Friday, the National Day for Australia. Almost all organizations were closed. The newspaper we scheduled an appointment with had forgotten it. The city council was closed too. At last we were interviewed over the phone. We told the media that Falun Gong is being persecuted in China and that the CCP harvests organs from living Falun Gong practitioners. The reporter was indignant after hearing of the CCP’s atrocities and expressed his support to us.

On our way back, we found that the gas money that we obtained through donations was used up. It was fortunate that every one of us brought more money and donated without hesitation.

It was my third car tour. I experience many tests in xinxing. I learned a lot. My improvement is through cultivation following "Truth-Compassion-Tolerance".

My brother, sister and I started practicing Falun Dafa by following my mother in 1997. When I heard of the car tour, I wished to join to explain the facts of the persecution of Falun Gong to the public. But before leaving, interference and conflict appeared. My father, a non-practitioner, did not let three of us join the tour. At that moment, I was not happy and did not follow his instructions. Later, I calmed down to study the Fa and realize that as a practitioner, my attitude toward my father was wrong. I did not have compassion and tolerance. I apologized to my father. In the end, I was able to join the tour, but my brother and sister were unable to come.

We visited Broken Hill. It was my third time to visit the city. I participated in clarifying the truth to the government. Almost all governmental officials along the way supported us. I believe it was because of our righteous thoughts.

In this car tour, we were not diligent in studying the Fa and practicing the exercises. We read half a lecture of Zhuan Falun each day. Sometime we did not practice the exercises. I felt I was not diligent and was not patient when others read slowly. I realized my wrong attitude. A practitioner should get rid of self, study the Fa and improve with others as one body.

During the last two days, when we explained the facts to a city mayor, we found that he was misled by the CCP’s lies. We were talking about his opinions. Some practitioners tried to explain the facts of the persecution. Due to interference of evil factors and our insufficient righteous thoughts, we were not able to let him know the facts. In talking with him, we did not send out righteous thoughts. Some of us even thought of leaving early. I knew my thoughts were not right. We should explain more to him.

In this tour, I got rid of some attachments and had big improvement.

I like sports, dancing and playing music. I joined the Divine Land Marching Band. When I was two years old, my mother played Master’s lecture to me and brought me to a park. I played beside when my mother practiced the exercises. When I entered Minghui School, I started practicing the exercises and study the Fa.

After practicing, I understood that there was something practitioners cannot do. Once a staff member in a library mistakenly criticized my classmate’s brother. I was not happy. Someone suggested several classmates and I throw shoes at the teacher. I did not want to do it and later those classmates did not go either.

I was the youngest one in this car tour. I and other young practitioners clarified the truth to media reporters and told them that Falun Dafa has spread to over 80 countries. I learned a little of truth-clarification. After I returned, I had a dream that I presented a bundle of lotus flowers to my mother.

I was born and grew up in Australia. I like reading and playing piano. I have an introverted personality. My aunt told me Falun Dafa is great and not to miss the predestined-relationship. Under her direction, I started practicing Falun Gong. I used to smoke and drink with my classmates. Now I stopped doing that.

One day I received a call that young practitioners wanted to have a car tour, but could not find a driver, and they asked me to be a driver. I was hesitant and not confident. Everyone encouraged me, so I joined the trip. I ran into some difficulties during the trip. For example, I wished to sleep early since I was tired after driving, but everyone else was talking and laughing. I was reluctant to ask them to be quiet. I told myself, "On this car tour, I must stay away from my daily easy life, adapt to new environments, and tolerate any hardships." I recalled Master’s teaching and fell asleep.

It was hot. Disturbance from mosquitoes, insects and flies, shortage of food and money, and not enough time to eat breakfast made us learn tolerance and endurance.

We had two groups with five people each. I was in the group that was to explain the facts to governments along the way. The other group clarified the truth to media. Mayors and city council members of cities along the way all supported us. We exposed the CCP’s slander of Falun Gong, and their torturing practitioners and harvesting organs from living practitioners for profit. We called on people to help stop the persecution. They were shocked and indignant after hearing our explanation. They said they supported us.

On this car tour, I felt the power as one body. When I stayed with these young practitioners, I felt we were brothers and sisters though, we came from different families with different ages. I treasure the feeling.