(Clearwisdom.net) Since December, 2006, the five major media in France have been advertising the upcoming Chinese New Year Spectacular in Paris on February 24, 2007. Some held drawings to give lucky readers tickets to the show. 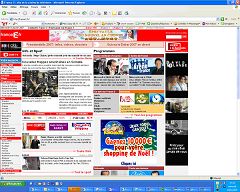 A drawing of twenty tickets to the show was held in December last year on the TV station's website. It was a great success. 5,550 people registered for the drawing. A representative of the TV station said the number has surpassed any number of participants for similar activities in the past.

France Bleu interviewed two representatives of NTDTV. During the thirty-minute interview, they introduced the uniqueness of NTDTV as an independent Chinese language TV station aiming to revive the traditional Chinese culture. It holds annual Chinese New Year Gala in many cities around the world and provides great cultural programs to a large audience around the world. The two representatives pointed out that NTDTV was the first media that reported the SARS outbreak in China and persisted on reporting human rights violations and the sabotage of traditional Chinese culture by the Chinese Communist Party (CCP). In addition, it also offered high quality analysis of China's economy.

Femme Actuelle is the largest magazine in France. One million copies of the magazine are distributed every week. A two-page-long report about the Chinese New Year Spectacular was published recently on this magazine.

The report introduced the beauty of the Chinese culture, the dazzling costume and the legendary fight between the good and the evil staged by the Chinese New Year Spectacular as well as the top level artists and band. It quoted the director of the band Mr. Chen Rutang who said his mission was to revive the spirit of the five-thousand-year-old Chinese culture destroyed by the CCP. The report said the audience would feel their energy recharged after watching the show.

After visiting the website of NTDTV, the reporter and director were excited by the glory of the Spectacular. They planned to hold a drawing of tickets to the show. Several representatives of the magazine said they would buy tickets to the show after reading the report.

Vivre au Feminin is a popular women's magazine with a monthly circulation of 182,000. The editor was very happy to hear about the Chinese New Year Spectacular and planned to hold a readers' drawing of tickets to the show. She also wrote an introduction of more than one page on her magazine.

Judaiques FM is a local radio station of the Jewish community. It started advertising the New Year Spectacular for free in January.

The radio station also scheduled three interviews to introduce the show. The first one was an in-depth report. It pointed out that NTDTV was an independent news source for all Chinese around the world, while all media in China were under the control of the CCP. The host also played two songs about Falun Gong during the interview.

Judaiques FM has scheduled another interview two days before the New Year Spectacular. If tickets haven't been sold out by that time, the host would encourage radio listeners to get tickets.