Poland: Bringing Attention to the Persecution of Falun Gong (Photos)

(Clearwisdom.net) On January 13 and 14, 2007, Falun Gong practitioners held activities in Skierniewice and Warsaw to let people know what Falun Gong is about and the brutal persecution of Falun Gong in China launched by the Chinese Communist Party (CCP). 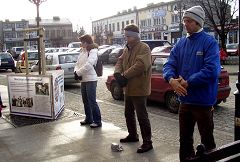 Although the weather was not good during the weekend, there were still many people on streets, many of them had deep sympathy and hoped to learn the truth.

Early Sunday morning, practitioners left for Warsaw from Skierniewice. They assembled near a subway station in the city center, and displayed pictures and information boards which describe the persecution happening in China. An orchestra band was performing nearby and people crowded the streets. Many people expressed their deep sympathy towards the tribulation experienced by Falun Gong practitioners. Some of them asked for information about Falun Gong practice sites and expressed the intention to come and learn the exercises.