The following are the cards sent by practitioners from the areas above: 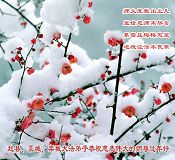 “Poland: Bringing Attention to the Persecution of Falun Gong (Photos)”