(Clearwisdom.net) On February 6, 2007, the Turkish newspaper Takvim published a news article saying that Falun Gong has become a popular way for Turkish people to keep fit. It reported that, with the increasing popularity of Falun Gong among Turkish people, practicing the Falun Gong exercises in Turkish parks has become a widespread activity. 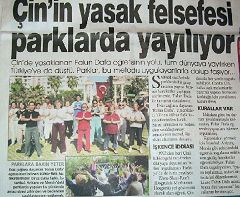 The article added that Falun Gong’s principles and exercises have spread widely all over the world, including in Turkey. Nowadays, people can see many Falun Gong practitioners practicing the exercises in Turkish parks.

Falun Dafa is an ancient cultivation practice that can purify people’s bodies and minds, based on the universal principles of "Truthfulness, Compassion and Tolerance." It is practiced by people around the world, but unfortunately not only is it banned by the Chinese Communist regime, but its followers are persecuted by the regime as well.

The article mentioned that anyone who is interested in learning Falun Gong may go to the practice sites at Ankara, Mersin, and Istanbul for free.