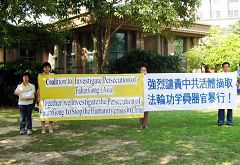 Practitioners in Malaysia hold a rally in front of the Prime Minister's office to call for attention to CCP's atrocity of organ removal from living Falun Gong practitioners.

The practitioners called on the Malaysian government in particular to help stop the persecution. Last December, the Ministry of Health indicated an intent to revise rules on organ transplantation to prohibit the organ trade. The practitioners called on the government to revise the rules to prevent Malaysian people from receiving organs from unknown sources in China. They indicated that the Malaysian government should pay attention to the voice of those 10,000 people and take measures to help stop the CCP's atrocities.

The rally started at 10:30 a.m. After submitting a report and a copy of the signatures, the practitioners held banners condemning the CCP's live organ removal. The banners caught the attention of police and government officials, who stopped to read them. A reporter from the Malaysian newspaper Kosmo came especially to cover the event after hearing about it. After listening to practitioners' explanation, the reporter became very understanding and asked for contact information and to be notified in the future for similar activities.

The signatures were collected on a petition that calls on the World Health Organization and International Olympic Committee to investigate the CCP's atrocity of live organ removal. In addition, the practitioners also sent copies of the signatures to the Ministry of Foreign Affairs, the Ministry of Health, and the Ministry of Youth and Sports, and strongly requested their attention to this issue to help stop the persecution.

The signatures were collection all over Malaysia. With their signatures, kind-hearted people expressed their wish for a timely end to the persecution to the Malaysian government and international organizations.