(Clearwisdom.net) The Asia-Pacific Economic Cooperation (APEC) had a series of meetings in Australia this year. Following last month's meeting in Canberra, a minister-level meeting on minerals was held in Perth, Western Australia from February 12-16. 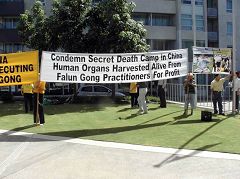 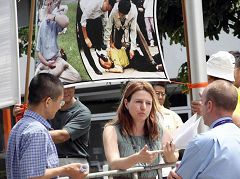 Beginning on the first day of the conference, Falun Gong practitioners held large banners in front of the entrance, calling on all APEC countries to join the investigation of Chinese Communist Party (CCP) organ harvesting atrocities.

Learning about the allegations for the first time, some conference participants said that such atrocities are shocking, yet they believe that the CCP could commit such deeds. A lady from Canada told a practitioner that she read the investigation report by Mr. Kilgour and Mr. Matas, and that the persecution of Falun Gong caught wide attention in Canada. She took more flyers for other meeting participants.

Ms. Louise Pratt, a Member of the Legislative Council in West Australia, came to support the practitioners. She said that the continuous efforts of practitioners were admired. She called on all government officials to pay attention to the CCP's trampling of human rights. Ms. Pratt is also Chair of the Standing Committee for Environment and Public Affairs. A submission is now before the committee to investigate the Organ Harvesting claims and what the West Australia State parliament can do to legislate and make recommendations to end this persecution.

As of February 12, 2007, the Coalition of the Investigation of the Persecution of Falun Gong (CIPFG) has completed primary organization on four continents. Four delegations, Australia, Asia, Europe and North America, are established.

So far the total members of the investigation delegations are 301 people. They are figures from different circles who are concerned about Falun Gong human rights. They include political leaders at national and federal levels, government officials of provinces, religious and community leaders, experts and doctors on organ transplantation, international human rights lawyers and criminal case lawyers, leaders of non-governmental organizations, international media and human rights activists.

“The Epoch Times: Another Round of Applause”