(Clearwisdom.net) On February 10, 2007, vigorous and resounding music from the street under bodhi trees in Berlin, capital of Germany, attracted many passersby. This was the first time for the European Divine Land Marching Band composed of Falun Gong practitioners to make its fist appearance in Berlin. The melody of "Falun Dafa is Good" and the banners reading "Stop Persecuting Falun Gong" informed people of the theme of the parade, and also inspired people's concern over the human rights issues in China. 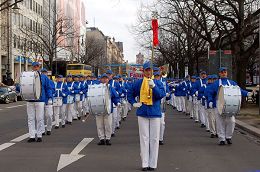 The street under bodhi trees 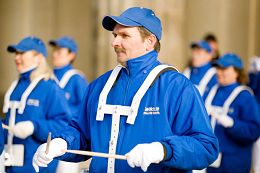 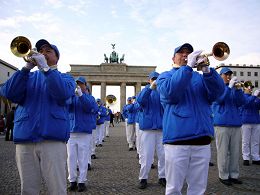 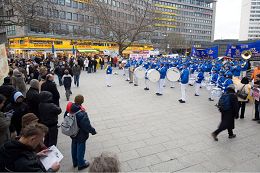 The European Divine Land Marching Band performs "Falun Dafa is Good" outside the Memorial Church, the spectators have an enthusiastic response