Falun Dafa by watching Master's nine lectures in three days, the Shulin Minghui School of Taipei County decided to hold a three-day Fa study winter camp. Due to the enthusiastic response, the organizer expanded the enrollment from 50 to 60 students. 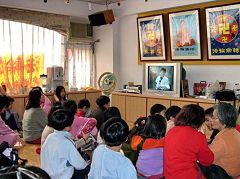 On the second day, singing "Falun Dafa is Good" accompanied by a saxophone, the young practitioners went to a park nearby to practice the exercises and to spread Falun Dafa. They drew people's attention along the way. Many people received and read the truth-clarification materials that the practitioners gave them. 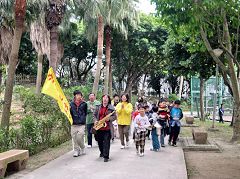 Walking to a park while singing "Falun Dafa is Good" 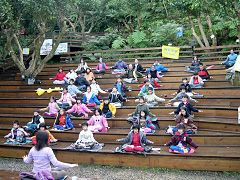 Doing the exercises in the park

Halfway through Lecture 7, a young practitioner suddenly got sick and ran to the bathroom and vomited. He knew that Master was cleansing his body. He was very courageous and didn't cry or ask to go home. When he was asked if he would like to take part in the mountain hiking event next day, he responded with a "yes" without hesitation. By the time all the activities of the day were finished around 9:00 p.m. and the parents came to pick up the children, he felt perfectly fine. The next day, he came to the subway station early as requested, and he went along with the others to hike and spread Dafa and insisted on staying until all the activities were finished.

The activity on the third day was mountain hiking in Tonghua Park to help the young practitioners to sense mother nature in a different way and also to have the opportunity to test their ability to endure hardship. At the beginning, the road up was not steep, so many young practitioners dashed forward, but some straggled behind and were trying to catch their breath. Then the leading practitioners stopped in a spacious place halfway up the mountain. They started to recite Lunyu and poems from Hong Yin. Then the entire team became energized and orderly. Afterwards, the whole group climbed the last section of steep trail, with no more rests and no complaints. The children were truly energized and courageous.

The whole group did Exercise 5 after they arrived at their destination on the mountain. Some young practitioners sat still in concentration, while others seemed to be enduring the pain in the lotus position. But they all persisted to the end. Afterwards, everybody put their hands in the Heshi position and said out loud: "We respectfully wish Master a Happy New Year!" 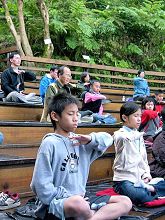 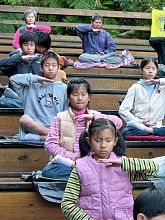 The entire group doing Exercise 5 on the mountain

The young practitioners continued with Lectures 8 and 9 after they got back to the Minghui School. Then, during art class, using the leaves that they picked while climbing the mountain, they made greeting cards to send to Master with watercolors. In this special way, the young practitioners expressed their wishes and appreciation to revered Master.