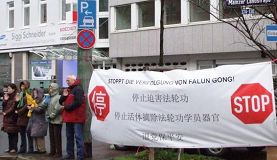 That day the temperature dropped quickly. A few practitioners' umbrellas were damaged by the heavy wind and rain. A Western practitioner who has practiced Falun Gong for almost ten years said that the harsh weather would not change practitioners' minds. They performed the Falun Gong exercises in front of the consulate peacefully and distributed leaflets and newspapers protesting the CCP human rights atrocities and called on people to withdraw from CCP and all its affiliated organizations. One businessman read the leaflet and expressed his willingness to help practitioners. There was also a cameraman from the mainstream media who came to photograph the activity.

The atrocity of the CCP taking organs from living Falun Gong practitioners and then selling the organs for huge profits was first revealed in March 2006. Former Canadian Secretary of State for the Asia-Pacific region Mr. David Kilgour and the famous human rights lawyer Mr. David Matas have concluded after an independent investigation that the large scale removal of organs from Falun Gong practitioners has indeed taken placeâ€"and still continuesâ€"under the auspices of the CCP. According to reports from the Minghui/Clearwisdom website for the last seven years, there is a huge number of Falun Gong practitioners who disappeared after appealing or were illegally arrested in Mainland China.

The persecution of Falun Gong by the CCP has lasted over seven years. More and more inhumane methods used in the persecution have been exposed, and all levels of society have shown their concern and expressed their condemnation.