Approximately 4,000 Falun Gong practitioners from Taiwan, Chinmen, and Penghu gathered in Chunghsiung New Village on December 1, 2007. They wore yellow and blue clothing, and formed the Chinese characters for "Falun Dafa is Good." They also took part in a large-scale demonstration of the Falun Gong exercises. Chunghsiung New Village is located in Nantou City, Nantou County, and was a former capital of Taiwan Province. 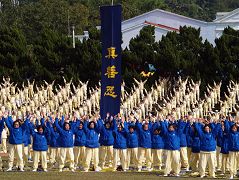 Mr. Wu Ching-hsiang was in charge of the design of the character formation. He said that the formation of the words, "Falun Dafa is Good" was to promote Dafa and Dafa's principles. Practitioners follow the principles of "Truth-Compassion-Tolerance," to cultivate and improve both mind and body. 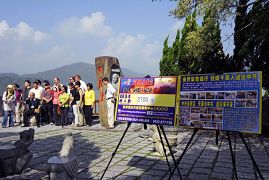 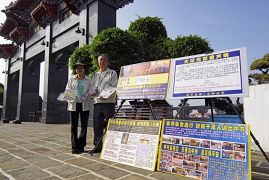 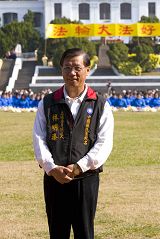 The Chunghsiung Police Division dispatched twelve police officers to the event venue to assist with traffic and safety. When the reporter mentioned that Falun Gong practitioners in China would be arrested if they held such an assembly, Li Tung-yi of the Chunghsiung Police Division said that the practitioners' assembly is legal and approved in Taiwan. He said that freedom of assembly is one of the practitioners' rights, and that the police are obligated to safeguard and help. The event took place smoothly and the police did not feel any pressure. 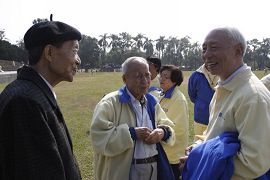 Mr. Ma, 96 years old, and Mr. He, 92, got up at 5:30 a.m. and went to join the event from Tainan. In the afternoon, they participated in the parade in Taichung supporting 30 million Chinese people quitting the Chinese Communist Party (CCP) and its affiliated organizations. The next day, they participated in the Taiwan Falun Dafa Cultivation Experience Sharing Conference. They walked in high spirits, not showing any tiredness. Mr. Ma said, "Cultivation is simple; we follow Master Li's teachings and follow the principle of 'Truth-Compassion-Tolerance.'"

Doctor Tan from Taipei said, "Before I started to practice Falun Gong, my career was all right. But I could not understand the meaning of life." She remembered she used to be very concerned about fame and self-interest, and she was not happy. After practicing Falun Gong, she understood the real meaning of life. Along with cultivation, her moral values improved and she became healthy. Now, she often shares her experience with her patients and hopes that everyone will come to know the real meaning of life through practicing Falun Dafa.

Ms. Lin from China said, "I was scared when I saw Falun Gong practitioners in China and kept my distance from them. I never thought that I would be practicing Falun Gong with my husband now!" Because of the CCP Central TV's lies and propaganda, she misunderstood Falun Gong practitioners and believed the staged Tiananmen Square self-immolation. Later, she went to Malaysia to do business and met her current husband. In her first meeting with him, she found that he was a good, sincere person and she later learned that he practices Falun Gong. She read Zhuan Falun after her husband introduced it to her and discovered the benefits of practicing Falun Gong. She also learned the truth about the persecution taking place in China. She started to practice Falun Gong and has benefited both physically and mentally. Her family members in China have also learned the truth of Falun Gong after she talked to them.

Twelve Falun Gong practitioners from Hong Kong participated in the character formation event. Among them, Mr. Lu started to practice in 1998. Before he started practicing, he suffered from a bubble in his lung -- a very rare medical condition. Doctors told him that only ten in one million people have this condition. When he was in hospital awaiting surgery, his aunt in mainland China introduced Falun Gong to him. Mr. Lu read Zhuan Falun for three days in his hospital bed. On the fourth day, the doctor found that his bubble had become smaller. Therefore, the major surgery was changed to minor surgery. Later, his aunt taught him to practice the exercises and he started practicing Falun Gong.

Mr. Lu lost lots of money in the stock market. As a result he often had insomnia and was addicted to cigarettes. After practicing Falun Gong, he quit smoking. He said that he felt joyful and fulfilled after he started cultivation practice.

He goes out to do truth-clarification one day per week. When he visited his hometown in mainland China, he advised his countrymen to quit the CCP and its affiliated organizations. In Hong Kong, tourist groups from the mainland are often closely monitored by their tour guides. The tourists generally try to take the truth-clarification literature secretly. Mr. Lu was impressed when he met a tourist from China who said that he knew about the issue of quitting the CCP and he wanted to quit using his real name.