(Clearwisdom.net) Baltimore is the largest city in the state of Maryland. It is about an hour's drive from Washington DC and one of the major port cities in the US. For the past 35 years, the city has held the Mayor's Annual Christmas Parade on the first Sunday in December. It symbolizes the start of the city's Christmas celebrations. The Mayor of Baltimore leads the parade for the two and a half mile walk, and the event attracts tens of thousands of spectators. "Merry Christmas" is heard nonstop during the parade. 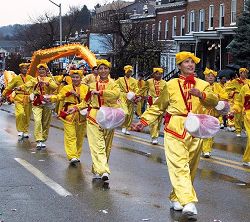 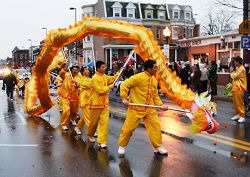 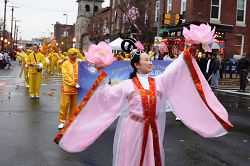 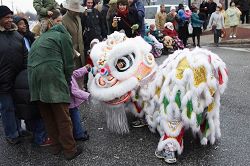 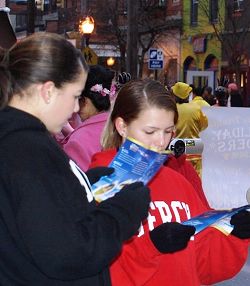 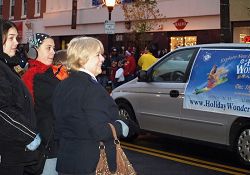 First time to see Eastern culture in the parade

The 2007 Mayor's Christmas Parade was held on December 2. Over 100 groups, including schools, TV stations, non-profit organizations, government organizations, and minority groups, participated in the activity. This year was the first time people saw a Chinese group in the parade. Falun Gong practitioners presented a Waist Drum Team, Celestial Maidens, a Dragon Dance, and a Lion Dance. The procession included banners that read "Falun Dafa" and "Holiday Wonders," a performance hosted by the Falun Dafa Association. During the parade, the dragon danced up and down, the adorable lions interacted well with the curbside spectators, and the Celestial Maidens in Tang Dynasty dress holding lotus flowers injected a sense of elegance. Their procession was warmly received. Many spectators expressed interest in seeing the Holiday Wonders performance.

Parade Chairman Tom Kerr said that the Falun Gong practitioners had entered an Asian procession in the parade for the first time. Mr. Kerr welcomed Falun Gong to join the parade next year.

Many spectators had never seen an Asian group before and thought it was very interesting. They think Baltimore has a "fun" culture and are open to various culture and arts. They welcomed Chinese culture and wanted to learn more.

Eleanor Johnson was surprised to see a Chinese group in the parade this year. Tom Brown knew a lot about Chinese history and was happy to see Falun Gong. Brown said Falun Dafa's contingent was the best in this year's parade. Two-year-old Steven couldn't take his eyes away from the dancing dragon and lion.

Jocelyn Cannan screamed, "Cool!" when she saw the Celestial Maidens. Cannan, a Baltimore native, majors in medicine and loves art. She said she'd never seen such a variety of cultures in the parade she sees every year. "Baltimore has never had such cool stuff!"

Mike Hughes is an author and has watched the parade for more than a decade. Hughes said that he noticed Falun Gong in the parade and he was happy to see it because he knew it is persecuted in China.

Ms. Sheila Dixon was just elected Mayor of Baltimore. She will be sworn in on Tuesday. Mayor Dixon was excited about having a Chinese group for the first time. She thinks Baltimore society is growing and becoming more diverse. As Mayor, she welcomes the Asian community and is making an effort to have more contact with it.

The Holiday Wonders Show, hosted by the Falun Dafa Association, will be held at 8 p.m. on December 18, 2007, at the Lyric Opera House in Baltimore.