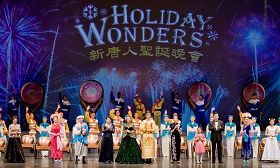 The show in Fort Lauderdale 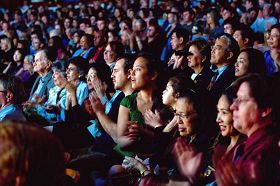 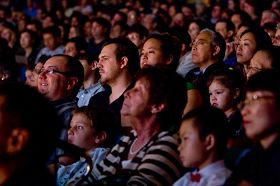 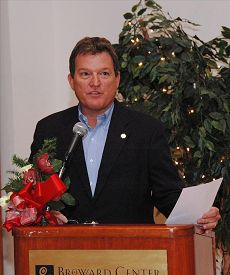 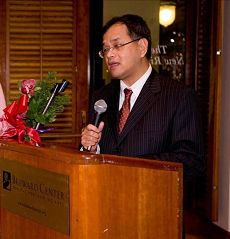 Mr. Hsie Chiwang, director of the Taipei Commerce and Culture Office in Miami, speaks at the show's reception

Mayor of Plantation, Ms. Rae Carole Armstrong, issued a proclamation to the company in appreciation of its contribution to promoting Chinese culture. Ms. Armstrong announced December 27, 2007 to be Holiday Wonders Day in Plantation.

Mr. Hsie Chiwang, director of the Taipei Commerce and Culture Office in Miami, attended the reception and watched the show. He highly praised the show, especially the drum performance. Mr. Hsie said, "I enjoyed the beauty of Holiday Wonders, and I plan to bring my friends to the show next year."

Mr. Tal Hal Selkowitz, a retired high school teacher, said that the performances were excellent and the actors were very talented. He enjoyed the fact that the show gave the audience a look into the richness of Chinese culture and history. Mr. Larry Strauss, a friend of Mr. Selkowitz, used to work at a theater, and he marveled at how well the performers stayed in sync and worked with each other during the show.

Nancy Gomec, a high school student, was excited after the show. She said that her favorites were the "Water-sleeves" dance and the "Mongolian Cups" dance. She said that all the performances were very beautiful. Her friend Quinn Bertucelli was amazed by the cups dance.

Divine Performing Arts will hold another show in Fort Lauderdale on December 28 before going to St. Petersburg.