On Tuesday, December 11, 2007, from 8:30 p.m. to 11 p.m., the China Human Rights Forum was held at a conference room in Dole City Hall in Jura Province, France. The conference was fully supported by the Mayor and members of Parliament. In their remarks, representatives from various human rights organizations exposed, illustrated, analyzed the Chinese Communist regime's evil nature and the atrocities it has perpetrated in spite of its economic development. The purpose was to focus public attention on the Chinese regime's crimes against humanity, including the ongoing genocidal persecution of Falun Gong. Conference participants said that what is taking place today in China in the run-up to the 2008 Olympic Games compares to what happened in Germany before the 1936 Berlin Olympic Games. Among other speakers, Mr. Wu Baozhang, senior journalist and former director of the Radio France International Chinese Program, called on the French people to differentiate between China and the Chinese Communist Party (CCP). In particular, he hoped that the French people would not be regarded in history as unwitting accomplices to the crimes committed by the Chinese Communist regime.

In her remarks, Ms. Marie-Francoise Lampertie, chair of the Agir Pour Les Droits De L'homme, said that, sinc nowadays many people believe that China has become stronger and stronger, it is imperative to pay more attention to the human rights situation in China.

In his speech at the forum, Mr. Wu Baozhang discussed the spiritual and physical persecution that the Chinese Communist regime has perpetrated against its people since the regime first took power. He also pointed out that, among the internal problems overshadowed by China's economic development, the most serious is the regime's trampling of human rights. He concluded that the heinous crimes committed by the regime have not been simply issues of trampling on human rights, but crimes of genocide and crimes against humanity. 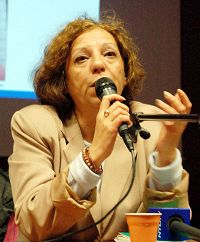 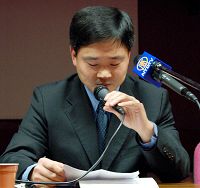 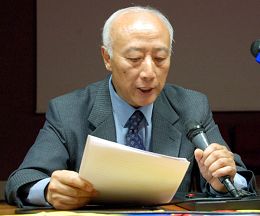 Panelists at the forum 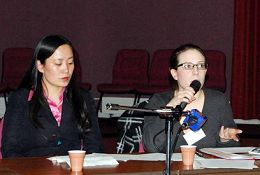 Chairman of the French Falun Gong Association Tang Hanlong said, "We are not getting political [by protesting the persecution]. What we have demanded is a free environment for practicing the Falun Gong exercises." Mr. Wu Baozhang said that the culprits and accomplices in the persecution must be brought to justice as soon as possible. He further reminded people throughout the world to be aware of the Chinese regime's intrinsic nature, even as the regime has been granted the honor of hosting the next Olympic Games. Wu said, "I know that the Olympic Games mean a huge amount of money for China. Have you heard that a Hong Kong TV station sponsored by the Chinese regime once broadcast, 'We are only concerned about how we can benefit from the Olympic Games, and we don't care about anything other than that.' The world's people are simply insignificant players in a show that will be used by the Beijing administration to make ill-gotten money through this event. The 2008 Olympics should be compared to the Berlin Olympic Games of 1936."

Mr. Wu Baozhang stressed, "If there is persecution, someone must stand up and resist it. The wheel of history is turning very fast. Not long ago, some Chinese victims of the Communist government announced the establishment of a democratic transitional government in New York. We are now living on the eve of an epoch-making incident. I sincerely hope that our French friends who love China are able to differentiate between China and the CCP, so that they will not fall into a trap similar to the one used by the regime during the Great Cultural Revolution. In particular, I hope that some day in the future, history will not regard us as accomplices to the crimes committed by the Chinese Communist regime."

When interviewed later, Mr. Wu said, "As a journalist, I clearly witnessed all the political movements launched by the Chinese regime in the past and the tremendous suffering that the Chinese people have undergone. That's the main reason that I devote myself to democracy and human rights."

Regarding the Chinese regime's persecution against Falun Gong, Mr. Wu emphasized, "None of the political movements launched by the regime in the past was as serious as the persecution of Falun Gong. It is by far the cruelest one, as the atrocity of harvesting organs from living humans to sell for profit never happened in the political movements in the past. The persecution is very cruel and despicable and it must be ended immediately. The culprits as well as the accomplices must be brought to justice."

As to the impact of the huge wave of over 30 million Chinese people withdrawing from the CCP and it affiliated organizations, Mr. Wu said, "These 30 million resignations from the CCP indicate that the CCP will not exist much longer. The Party must put an end to the persecution against its own people immediately and take full responsibility for the crimes it has committed in history."

Ms. Chen Ying, a Falun Gong practitioner who had been persecuted by the Chinese regime, revealed the extent of the cruelty of the persecution by sharing her personal experience with the forum participants. She witnessed brutal methods of torture and inhumane tactics employed by the Chinese regime to torture peaceful practitioners. She herself was subjected to cruel mental and physical torture. She said that these crimes are still going on in China's prisons, forced labor camps, and brainwashing centers. In particular, the atrocity of harvesting of organs from living practitioners is still taking place in China covertly. Chen Ying said, "During my illegal incarceration, many practitioners were woken up at midnight, when someone called out the number assigned to them, and told to pack up their belongings. They were taken away by armed police officers early in the morning and usually the police wouldn't be back for several days. According to some criminal inmates there, the practitioners assigned a number were sent to a concentration camp established exclusively for the confinement of Falun Gong practitioners. Both the Chinese police and criminal inmates said that concentration camps have been built in Xingjing, Hebei, and other provinces in northeast China to incarcerate Falun Gong practitioners."

Chen Ying's experiences in Chinese prisons and forced labor camps bore witness to the atrocities documented in the investigation report written by Canadian independent investigators David Kilgour and David Matas. Ms. Chen said, "What they concluded in their report is what I experienced in the prison and the forced labor camp where I was illegally incarcerated. I was forced to undergo physical checkups several times. At the end of September 2000, I was given a number by the police, as I refused to tell them my name. [Editor's note: because of the CCP's policy of implicating and harassing practitioners' families, associates, and places of employment, practitioners often refuse to give their names when they are arrested.] One day, I was called out by the police. After I was handcuffed and shackled, I was taken to a hospital for a physical examination, including a heart check up, an electrocardiogram, blood tests, vision check, etc. I was injected with unknown drugs, which made me lose my memory. My memory did not return until March 2003, after I was able to leave China and come live in France. I was so shocked when I saw photos of Falun Gong practitioners after they had been cruelly tortured. I was so fortunate to be able to come to France and resume my cultivation of Falun Gong and fully regain my health."

The next speaker was a representative from Amnesty International (AI), who re-affirmed the importance of paying close attention to human rights. He also introduced the activities to be held by Amnesty International in the near future to defend human rights. He specifically mentioned the open letter AI wrote to urge to the general public to help rescue Falun Gong practitioner Cao Dong, who is illegally imprisoned.

The last speaker was Ms. Marshall Hu, who briefed the participants, with PowerPoint slides, on the Chinese Communist regime's human rights persecution against Tibetans as well as the crisis Tibetan culture is facing. Throughout the forum, not only were the remarks very touching, but the atmosphere was very congenial and supportive. The speakers also had very good interaction with the audience, who came away with a clear understanding of the human rights crisis in China today.