In the past, Chinese people living overseas did not have many unique ways of their own to celebrate Christmas, but this year, the "Holiday Wonders" show has created a Christmas celebration in a Chinese fashion.

On December 24, Beacon Theatre on Broadway in Manhattan was packed with people who came to see the "Holiday Wonders", and among them were many Chinese people. 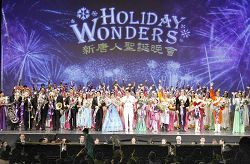 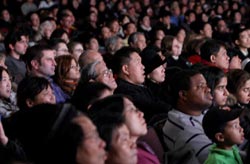 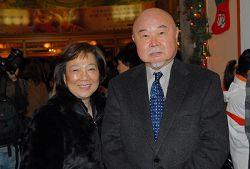 Mr. Lu Mingsen and his wife 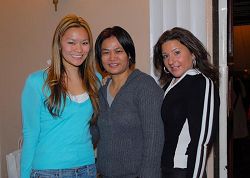 Ah-Tsai and her daughters from Panama; Ah-Tsai said that the show made her miss Chinese culture.

Mr. Pan and his wife came to America in 1984. They live in Arkansas. They came to New York for Christmas and saw the advertisement for the "Holiday Wonders". Mrs. Pan said: "We have seen many shows in China before, but this show is very different. We liked all the dances. They tell stories which are educational and have profound contents."

Mr. Pan said: "We have been in America for more than 20 years, but have never seen such a good show. Most American people don't have a deep understanding of Chinese culture. I believe that the show will help them." Mrs. Pan said: "The dances will help Americans know how ancient Chinese people lived."

Mr. Pan went back to China last August. He said: "Everybody is busy making money, and few people care about culture. A country cannot develop if its people only focus on the economy." He said, "Chinese people should have the confidence to promote their 5000-year old culture. I believe that the show tonight is a model."

Mr. Pan said: "Many overseas Chinese people have a lonely feeling in America. We don't have chances to have cultural communications with each other. So, I am very glad to see the performances tonight."

Mr. Lu Mingsen, the former chair of the Taiwanese Commerce Association in New York and chair of a construction company in New York, came to the show with his wife. He said, "The performances were excellent. The designs of the dances, stage lights and the background were all perfect. The cooperation among the actors was also good. I have been living in America for 37 years, but I've never seen such a good show."

Mr. Lu said that many dances told stories with elaborate designs, so they were very educational. He said: "The 5000-year old culture is very profound. The show manifests it through dances and songs very well. Telling historical stories through dances will help promote the traditional culture."

“New York: "I See the Spirit of Compassion and Forgiveness in the Show." (Photos)”