(Clearwisdom.net) A "Truthfulness, Compassion, Tolerance Art Exhibition" was held from December 11th to the 15th at the Mediatheque Exhibition Centre in the city of Dole. This art exhibition was held by the Falun Gong Association of Jura Province, receiving assistance and support from the Lord Mayor and MPs of Dole. Visitors were shocked at the brutal persecution of Falun Gong practitioners by the Chinese Communist Party (CCP) depicted in the paintings. Many people expressed how they were moved by the themes of the paintings as if watching stills from live camera shots. 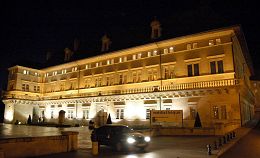 Mediatheque Exhibition Centre in the city of Dole 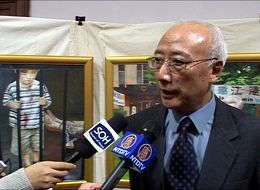 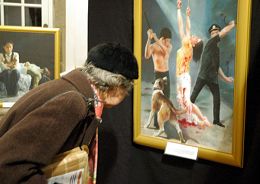 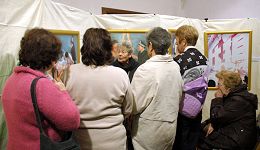 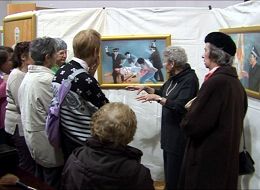 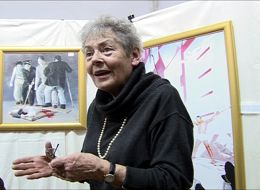 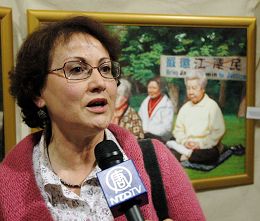 A member of the Christian Anti-Torture organization, "... Every picture touches and shocks my heart." 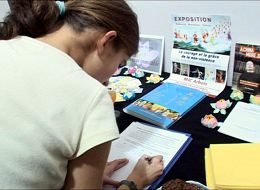 The exhibition's main coordinator, Gothy Bagage, said that the purpose of the paintings on display was to reflect the persecution Falun Gong practitioners receive in China and how they use peaceful ways to stop the persecution. Gothy Bagage also talked about messages the exhibition gives out, "These paintings show a peaceful protest. It would be difficult for people to imagine the cruelty of the CCP, but I think they can be drawn close to reality when we use different artistic means. The paintings show the peaceful and unyielding spirit of the Falun Gong practitioners in the face of violence. This can awaken the compassion within people, thereby helping us to stop this persecution completely."

France has a long history of artistic culture, with the city of Dole being one of the most cultured and ancient cities in France. On the subject of the reception of the exhibition, Gothy Bagage said, "Different artistic styles are used to convey the unending compassion and tolerance, plus how the brutality should be stopped. When people find out about the existence of these cruelties from the paintings, they all feel stunned and want to pay more attention to what is taking place in China and want to stop this persecution."

Mr. Baozhang Wu, who is a veteran media professional and the former director of the Chinese department of Radio France International (RFI), attended the opening of the art exhibition. He said, "What moves me about these types of art exhibitions is that French people from all over the country not only come to carefully view the paintings, but they also truly try to understand the meaning behind them."

"From the people I have spoken to, I believe French people who came here today to see the paintings have begun to understand the bad name the CCP is giving to Falun Gong. They see that it is only a politically motivated action and that Falun Gong is not at all like what the CCP says it to be. Falun Gong is a completely compassionate cultivation group and they are now enduring the most brutal and violent persecution in the whole of the Chinese history, especially after the Cultural Revolution. What is more, this persecution is still happening in China."

"Therefore, I feel this kind of exhibition will definitely call upon the French people's conscience. It will urge MPs and political leaders of the country to win back justice for Falun Gong and the people of China"

A member of the Christian Anti-Torture organization said, "I am truly moved by the content of these paintings. It is as if I am seeing actual photographs of the persecution. Although I am in some ways familiar with torture methods, I had no idea that it could be as cruel as this. Every picture touches and shocks my heart."

"The Christian Anti-Torture organization not only researches about the persecution existing in China, but also takes action and uses petitions, acting as an urgent voice for the people under persecution in different countries."

The city of Dole is an ancient and historical city which keeps 15th to 18th century buildings around the Collegial Notre-Dame in perfect condition. Many alleyways and roads are also artistic masterpieces. In the city centre there is also a beautiful area, called by tourists as the "Small Venice". Similar to many other cities in France, the history of Dole is full of artistic and religious culture.