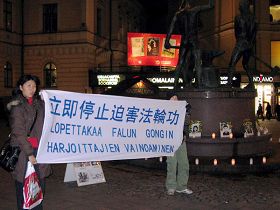 Falun Gong practitioners have been protesting against the Chinese Communist Party's (CCP) persecution of Falun Gong and calling for an immediate stop to the persecution outside the Chinese Embassy on weekdays all year round. Because of the practitioners' truth-clarification, many people going to the consulate for visas to China have learned the facts about Falun Gong and the CCP's atrocities against the practice. Recently, when a Falun Gong practitioner was asked by a news reporter from the Finnish MTV3 TV station about when they would stop the protest, he answered that they will keep up the peaceful protest until the persecution ends.

It was already dark by 4:00 pm. During the candlelight vigil the practitioners displayed images of those who died due to the persecution, and put up a banner which read, "Immediately stop the persecution of Falun Gong." The practitioners conveyed their hopes that the CCP's atrocities against Falun Gong will be brought to an end through the joint effort of all people.

Many people accepted flyers about Falun Gong from practitioners. Some youngsters asked why such terrible things were happening today. A man from Turkey said to a practitioner, "I know about the communist party. They always do bad things. You are doing very well [to expose the facts]."