The curtain descended on the second show of Holiday Wonders at Ovens Auditorium in Charlotte, North Carolina on the evening of December 20, 2007. The wonderful performance by the Divine Performing Arts Company (DPA) won prolonged applause. 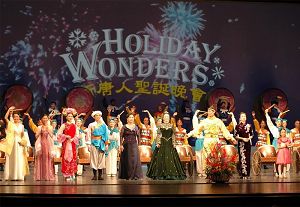 Artists answer curtain call at the end of their second show in Charlotte, North Carolina on the evening of Dec. 20, 2007 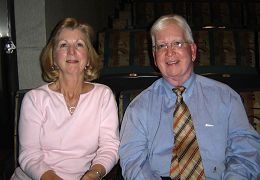 Dianne and Donald McNanus had high praise from the show 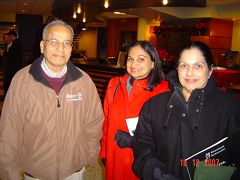 Audience members of different backgrounds were enthralled by the performances, which are so rich in content and characteristic of traditional Chinese culture.

High school students Mallory Jones and Megan Smith loved the performance and the costumes of the Tang drummers. The artists' movements were perfect though they had to jump so high and execute such complicated movements. They also thought the show was very educational. For example, "The Ladies of the Manchu Court" showed the audience the unique costume and shoes of Manchu princesses.

Mr. Oyang Rongcheng, an ethnic Chinese from Cambodia, has Manchu blood. He felt that "The Ladies of the Manchu Court" conveyed the original flavor of Manchu dance. He said, "The artists did an outstanding job. My ancestors were Manchu. I can sense the flavor of Manchu from the dance."

Dianne and her brother Donald McManus loved the show. Dianne is teacher in a junior high. She liked the costumes, especially those in the fan dance. Donald is a pastor and writer. He had written a book about missionaries who were long stationed in China. He also liked the fan dance and the drums in "Drummers of the Tang Court."

The Divine Performing Arts Company brought the audience a world of pure truthfulness and compassion. The matchless backdrops, music and dance spread the inner meaning of the divinely-inspired Chinese culture. Many parents viewed it as a great educational opportunity for their children.

Mr. Ye, a Chinese American from Cambodia who has lived in the U.S. for twenty years, brought his whole family to the show. He said, "The performance is very professional. My son was born here. This performance teaches him a lot about traditional Chinese culture."

The mother of thirteen-year-old Al said, "I want him to learn about China. I like the Chinese costumes the best. China is such a great country. I have never been to China, but I will go there someday. I brought my son to the show as a Christmas gift. It is educational for him."

Seven-year-old Wei Miaomiao was adopted from Guiling, China. Her parents brought her to the show to introduce Chinese tradition to her.

Claudia's grandma came to the U.S. from Singapore twenty-two years ago. She said, "I would like to show my granddaughter what traditional Chinese culture is because I am Chinese. The show is very educational. It is a Christmas gift to my granddaughter."

Parents of children at Smith Academy of International Language brought their children, who study Chinese at school, to further expose them to Chinese culture through the arts.

Mr. Wang Xuejun, Associate Director of the Divine Performing Arts Company, said that Holiday Wonders is a world-class production. Everything, including the stage designs, backdrops, animation, costumes, music, dance and song, was professionally designed and performed. "As soon as the curtain opens, the audience will be awestruck by the backdrops and music."

An Indian-American man said after the show that he had the impulse to tell the organizers how much he admired the spirit of the show. It presented something noble, but he couldn't quite describe it. He could feel the great spirit. He repeated, "I am full of admiration."

The next stop of the Divine Performing Arts Company will be the War Memorial Auditorium in Greensboro, North Carolina on December 23.