On December 18, 2007, Baltimore, Maryland was fortunate to be the first stop on the world tour of Divine Performing Arts. The performance showcased traditional Chinese culture and received proclamations and congratulations from Western government officials. The audience gave the show rave reviews. 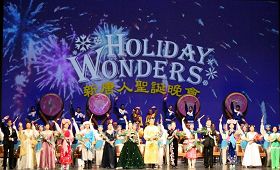 Baltimore's Lyric Opera House welcomed the arrival of the touring company of Divine Performing Arts. The audience was mesmerized by the elegant and graceful singing and dances, and experienced the profound inner meaning of traditional Chinese culture. 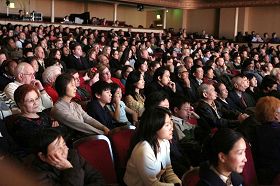 When the curtain was raised, the stage depicted a grand and dreamlike scene. The first number on the program, "Creation" presented an ancient legend, in which the creator of the universe leads divine beings to descend to the land of China to fulfill a great mission. They created the divinely-inspired Chinese culture. The gorgeous costumes and majestic music of the great Tang Dynasty captivated the audience.

There were also dance performances including the Sleeve Dance of the area South of the Yangtze River, a Mongolian dance and a dance of the Manchu Court. Soprano Jiang Min performed the song, "Sorrow Melts Away," Huang Biru sang "May You Understand," Baritone Qu Yue presented, "Truth Alone Sets You Free," and Alto Yang Jiansheng performed, "For Whom?" The vocalists used the medium of song to convey profound truths and to tell the audience about Falun Gong practitioners' arduous efforts in offering salvation to people in face of persecution. 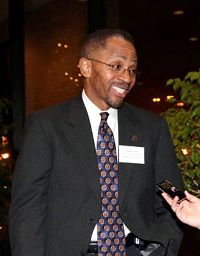 Hosea Chew, Director of Administrative Services for the Baltimore Mayor's Office, said that the show was moving, "I was almost brought to tears." His favorite performance was "The Fruits of Goodness." In this dance performance, a sudden thunderstorm prompts two wayward youths to seek shelter in an abandoned Buddhist shrine. Moved by the sight of its holy statues, one of the pair attempts to shield the images from the insult of rain. His simple act of reverence touches Heaven with its sincerity, evoking a profound and dramatic response.

The General Manager of NTDTV in Washington DC Xiang Tong said in an interview with Fox News, "China has been called the land of the divine. Holiday Wonders is presented by Divine Performing Arts, a New York based dance company. In China, ancient legends of gods, Buddhas and Taos have been passed down for generation after generation. Spirituality is at the essence of Chinese history and culture. Our Holiday Wonders presents this in a very authentic way. We are going to present authentic and traditional Chinese culture on a grand scale."

Prior to the show, a reception was held for dignitaries, including people from the business sector, political circles and the art community. At the reception, Mr. Chen Jun, spokesperson for the Falun Dafa Association of Washington DC, who sponsored the Holiday Wonders show, said that the essence of the deepest values of Chinese culture can be summarized as "Truthfulness-Compassion-Tolerance." It can bring serenity and peace to an individual, a family and society. Mr. Chen said, "However, what saddens us is that such values have been decimated in today's society, in particular, the Communist Party has destroyed many traditional Chinese beliefs and values. The recently exposed issue of tainted food from China is one of the manifestations of this lack of morality. We feel that it is very important to revive authentic culture and values."

Mr. Chen also said that morality and the arts should be balanced with each other. Morality determines the content of the art, and art affects people's morality. He said that Divine Performing Arts not only has a highly refined level of dance and music, dazzling costumes and sumptuous stage backgrounds, but most important is that their performances reflect the best of Chinese culture, which is pure, righteous, uplifting and inspiring.

Julia Gouge, President of the Board of County Commissioners of Carol County, Maryland, said that the performers' facial expressions were so pure and beautiful. She said that it seemed like they were performing just for her. Each number had its own special characteristic, and it was hard for her to pick out which one was her favorite. She said that she was particularly amazed by the male performers. The dancers' highly developed skill and unison of movement, and the invigorating drumming was really incredible. She said that the entire performance was a very inspiring experience.

Sandy Taylor, founder of a music scholarship foundation in Washington DC, has watched the show every year. She said that the performance this year was particularly exquisite, including the stage designs, technical standard of the dancers and the costumes. She thought the sopranos and baritone were outstanding.

Keith Hill, Vice Chair of the Board of Governors of the National Press Club, said that the performance was beautiful and exquisite and had a profound spiritual meaning. He believes that Truthfulness-Compassion-Forbearance are very good principles, which everybody should follow. He said he was impressed by dance drama, "The Power of Awareness" very much. He also said that he had been to China and learned about the Chinese Communist Party's persecution of Falun Gong.

Hou Xuezhang, professor of mathematic at Towson University, was very pleased to attend the show. He said that all Chinese people should promote authentic Chinese culture around the world. Professor Hou said that it is absolutely wrong to persecute Falun Gong. Trish Robinson works in a publishing company. He complimented the performance and said that the show was fantastic and amazing. He said that the performance moved him because he believes that people should be kind. He overcame many inconveniences to attend the performance and indicated that he believed he was meant to see the show.

Troy Rawling, manager of an advertising company in Baltimore, often attends performances at the Lyric Opera House. Troy said that he had never seen a performance of such a high standard before. He was captivated by the Divine Performing Arts company, including the splendid costumes and choreography. Troy appreciated the flow of the program and said he was also very happy to have an opportunity to learn about Falun Gong. He thought that the lyrics shown on the backdrop were inspiring. Troy said that the aim of art is to express reality, and if the persecution is going on, then, we should let more people know about it and put an end to it. 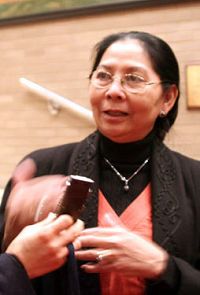 Ms. Tersh is dance teacher who has been teaching Cambodian folk dance for a long time. She loved the performance by Divine Performing Arts. Mr. Tersh, Chairman of the Cambodian Association of the Washington area, enjoyed each number on the program. What impressed him most was that the culture of the Buddha School was presented throughout the evening. Mr. Tersh said that the performance uplifted him, and he said that he was so pleased to have been able to see it.

Graphic Designer Heather Vankeuren said that she enjoyed seeing the many cultures represented in the various performances. She especially enjoyed the drumming, finding it invigorating and uplifting. Vankeuren paid particular attention to the unique colors of the show. She noted that the arrangement and harmony of colors for the different dance numbers was beautifully incorporated with the stage backgrounds.

Columnist for the Epoch Times Dr. Zhang Tianliang said that he had a sense of both ancient and new while watching the performance, from the ancient values and legends, to the advanced technical skill displayed in the animated stage backgrounds, acoustics, lighting, and music. He felt that this perfect blend of classical and modern techniques achieved a stunning effect. He said that Divine Performing Arts has taken the lead in reviving traditional Chinese culture, and has brought the real culture of China to the world stage.

The Divine Performing Arts Touring Company received more than ten proclamations honoring the Baltimore performance. Both US Senators from Maryland, Barbara A. Mikulski and Benjamin L. Cardin, and US Congressmen including Chris Van Hollen, Elijah Cummings and Albert R. Wynn, Maryland State Governor Martin O'Malley, Baltimore Mayor Sheila Dixon, Baltimore City Council Member Rawlings Blake and executives from Harvard County, Baltimore County, Howard County and Montgomery County expressed their thanks to Divine Performing Arts in official proclamations. They thanked the members of the company for their efforts in presenting such a brilliant performance, as well as their effort in sharing traditional Chinese art and culture with the world. They also thanked the Falun Dafa Association of Washington DC for sponsoring the show.

US Senator Benjamin L. Cardin said in his letter to the Divine Performing Arts that he congratulated the members of the company for their outstanding talents and their contribution to traditional Chinese culture. He said he felt very fortunate to have such an opportunity to experience China's rich culture.

US Congressman Chris Van Hollen has a considerable understanding of Chinese culture. When learning about the mission of the Divine Performing Arts, he said that different nationalities can borrow and learn from the Chinese people's traditional virtues, such as being diligent, respecting the elderly and caring for the young. He hoped that people of all nationalities could learn something about traditional Chinese culture from seeing the Holiday Wonders show. The Mayor of Baltimore thanked the Divine Performing Arts company for bringing the best of traditional Chinese culture to so many places around the world. She expressed hope that, "the Holiday Wonders show, with its amazing dancers and musicians and beautiful costumes and stage efforts, will mark the beginning of a new holiday tradition for much of its audience."

In addition, the Maryland State Senate and Baltimore City Council unanimously passed a resolution to commend Divine Performing Arts for displaying the essence of genuine traditional culture and for bringing a sense of human dignity and values to Maryland and the whole world.

The performance received much attention from the local mainstream media. The largest newspaper in Baltimore - the Baltimore Sun - published photos of Divine Performing Arts in its December 13 issue and introduced the Holiday Wonders show with an article entitled, "Asian Wonders."

The Baltimore Examiner also published photos of Divine Performing Arts in its December 15 issue and interviewed the stage manager of the Holiday Wonders show, Peijong Hsieh.

After the show, the Divine Performing Arts Touring Company traveled to their next stop in Charlotte, North Carolina, for two performances.