On December 19, 2007, the Divine Performing Arts Company (DPA) presented Holiday Wonders in Owens Auditorium in Charlotte, North Carolina after its successful show the previous day in Baltimore. Dance teacher Melissa Lewis from Smith Academy came to watch the show and said that she learned a lot that she did not understand before and was impressed with the deep meaning of Chinese dance. 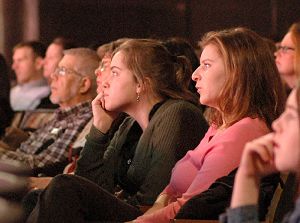 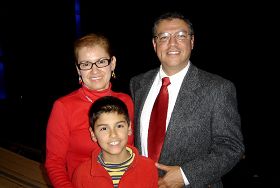 Carlos Orozco (right), an engineering professor from University of North Carolina at Charlotte, with his family 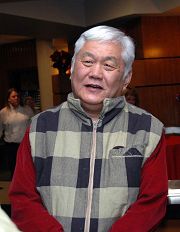 The show presented traditional Chinese culture and history from an all-new perspective to the viewers. The programs in the show include dances relating to legends and traditional values. Ms. Xie Peirong, stage director for Divine Performing Arts, said, "Each of our programs is researched to reflect historical and cultural features accurately. Music, costumes, and dance modeling are based on historic references and ancient frescoes. Each of our programs is original and true to traditional culture. Only true culture can move people's hearts." "When the curtain is opened, viewers will feel the big difference. Many viewers watched the Chinese cultural programs sponsored by Chinese Communist Party (CCP) before. They now have this comparison and are especially moved."

Donald McManus, a pastor who wrote a book about a missionary who lived for a long time in China, said he liked "the Fan Dance and the resounding effect of the Tang Drums." His sister, Dianne, a middle school teacher, thought "the sceneries are pretty."

Carlos Orozco, an engineering professor, has gone to China in the past and seen a few shows there. Orozco said, "This is a lot better, well organized, wonderful. I love that they speak English then switch to Chinese."

Shelly Smith, a senior at Ledfor High School in Thomasville, NC, said, "I loved the drums and the flowy sleeve ribbons."

Sydney Ling Carpenter, an adopted Chinese girl of an American couple, was shy and had to be coaxed into telling her favorite program. She whispered to her mother that she liked the Tang Dynasty drummers and the last number before intermission, "The Fruits of Goodness."

Renowned Chinese scholar Zhu Xueyuan came to watch the show. Mr. Zhu said, "The performance is very professional. I am very pleased to see there is such a group promoting Chinese traditional culture." When asked which performance he liked most, he said, "My favorite was the Tang Dynasty drummers. It was very impressive."

On December 14, the Charlotte Observer published an article by Julie York Coppens.

The report stated, "The elaborate touring show, a "Riverdance"-style fusion of classical Eastern and Western dance, music, myth and spectacle, strikes most American viewers as nonpolitical. But the Communists have spent six decades trying to wipe out the arts of dynastic China, Cuirong explains. And the show's producer, New Tang Dynasty TV, has earned the ruling party's disfavor with its independent reports on everything from SARS to lead-tainted toys.

That's why staff at Ovens Auditorium in Charlotte, and other U.S. venues booking NTDTV productions, have received polite calls from the Chinese embassy in Washington, D.C., requesting that the show not go on.

Expect an explosion of color and sound on the Ovens stage, as centuries of Chinese creativity come to life against high-tech scenic backdrops. "Holiday Wonders" features more than 60 members of the Divine Performing Arts [...], professional dancers and musicians from around the world who train together in New York and whose name reflects the traditional Chinese belief that all culture comes from God."

On the morning of December 19, local organizers of the Holiday Wonders show held a press conference in Owens Auditorium. Three local TV stations including Columbia Broadcasting Corporation TV 3, Times Warner TV 14, and Fox News interviewed Ms. Xie Peirong, the stage director, and Leeshai Lemish, one of the show's hosts. The Chinese traditional culture shown by the company and CCP's interference became the focus of the interview.

The show will play one more night in Charlotte on Dec. 20 before moving on to Greensboro, NC on Dec. 23 to finish the North Carolina tour. The tour then continues to Florida. Holiday Wonders is part of the largest Chinese performing arts series in the world. During the 2007-2008 season, the shows will play in over 50 cities to an audience of over 650,000.

“Understandings Gained from a Missing Passport”