(Clearwisdom.net) According to the The Epoch Times, the Ontario Supreme Court ruled on Nov. 23, 2007 that the All-China Lawyers Association (ACLA), which had sought to intervene in the torture lawsuit against Jiang Zemin, would have five restrictions in its involvement, including being forbidden to submit evidence or make arguments in the case. The ruling dealt a serious blow to Jiang Zemin's attempt to have the case dismissed through those under his control outside of China.

Attorney Theresa Chu, CEO of the U.S. Human Rights Law Foundation's Asia branch, which helps Falun Gong with lawsuits against Jiang Zemin around the world, told a reporter, "Obviously, after a default judgment was given in Bo Xilai's case in Australia, Jiang worries about the civil charges being brought against him in the lawsuits in seventeen countries. Therefore, Jiang is clearly working harder to intervene in these lawsuits through overseas intermediaries in an attempt to influence the court's decision."

"The Falun Gong human right lawsuits are regarded as being highly politically sensitive. They are a litmus test of whether the courts put politics before law, or if they follow the law and international justice standards to make independent judgments. Our ultimate hope is for the Chinese court system itself to take action to bring this human rights criminal to justice, rectify past injustices, and bring this to a satisfactory conclusion for all Chinese people, but Falun Gong practitioners and their families in particular. This would also serve to help the international community view China in a new light."

In August 2006, ACLA sought to intervene in the lawsuit. On November 23, 2007, the Ontario Supreme Court ruled that ACLA would have five restrictions to its involvement, including being forbidden from submitting evidence or making arguments in the case. Kate Kempton, the plaintiffs' lawyer, told The Epoch Times that she was pleased with the decision. "We had obviously hoped to succeed in preventing the ACLA's intervention entirely, but the court ordered quite a limited intervention, and we are happy about that," Kempton said.

The Background of ACLA

According to the homepage of the Chinese Department of Justice, ACLA is a subordinate organization of the Department of Justice. Mr. Han Guangsheng, the former chief of the Justice Bureau of Shenyang City, told The Epoch Times that lawyer associations in China are not independent of the government. Mr. Han himself was the chair of the Lawyer Association in Shenyang when he was the chief of the Justice Bureau. 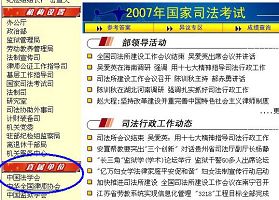 In the Constitution of the ACLA, which is available at www.legalinfo.gov.cn/gb/moj/zhishudanwei/lvshixiehui.htm, Item 4 and 17 state that "ACLA is supervised and guided by the department of justice" and "the justice department has the right to assign a qualified lawyer to enter the election campaign of ACLA as a candidate."

Mr. Guo Guoding: ACLA is controlled by the CCP 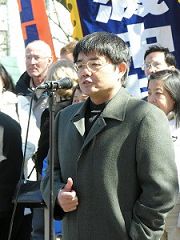 Dr. Terri Marsh: the CCP is nervous about the lawsuits

"The Chinese Communist Party is very nervous about the lawsuits filed against the major perpetrators of the persecution of Falun Gong," said Dr. Terri Marsh, a U.S. attorney who has worked on many of the cases. She continued, "That's the strategy of those officials involved in the persecution--they don't reply to the lawsuits; they use a proxy to try to have the case dismissed. This is because they know that the defendants are responsible for these crimes. If they were to come to court to defend themselves, they would be held accountable for their crimes."

Jiang responded to the lawsuits indirectly

Mr. Shi Cangshan, a China expert living in Washington D.C., said: "Jiang Zemin is trying to interfere with the lawsuits through the ACLA, which is an indirect response to the case. This signifies a new phase in the progression of the lawsuits. Although the international community may not be fully clear on the nature of ACLA, the Chinese people know quite well that it answers to the CCP and that the CCP is up to no good."

Lawsuits against Jiang all over the world

At least 3,107 Falun Gong practitioners have died as a result of the persecution since July 20, 1999.