The 35th Annual Mayor's Christmas Parade in Baltimore recently announced the winners of this year's parade entries. The Falun Dafa group, participating in this event for the first time ever, stood out among over a hundred entries and won the first place award. 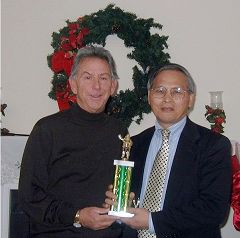 Dr. Lai Shantao (right) accepts the first place trophy on behalf of the Falun Dafa Association of Washington, DC. The award is presented by Tom Kerr (left), Chairman of the organizing committee of the "Mayor's Christmas Parade" in Baltimore 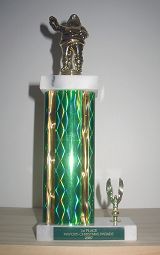 Tom Kerr, Chairman of the organizing committee for the annual Christmas parade in Baltimore, said that throughout the entire parade, all the performers in the Falun Dafa group had been so dedicated from beginning to end. He said it seemed that they truly wanted to share their beautiful culture and bring blessings to the tens of thousands of spectators.

Mr. Kerr helped organize the first parade 35 years ago. On December 16, 2007, he presented the championship trophy to the Falun Dafa Association of Washington, DC, and said that the Falun Dafa group was the first Asian group that has ever participated in the parade. The Falun Dafa group was composed of a waist drummers' troupe, "celestial maidens," and Dragon and Lion dance troupes. Their unique performances left a deep impression on the judges and organizers.

The Mayor's Christmas Parade in Baltimore was held on December 2 this year. Over a hundred groups participated, including local schools, television stations, non-profit organizations, government organizations, and minority groups.

Kerr specifically mentioned that what made the Falun Dafa contingent stand out from other groups was that their entry presented an air of purity and beauty, giving people a refreshing, pure, and invigorating experience. The parade judges unanimously voted to issue this year's championship trophy to the Washington, DC, Falun Dafa Association.

Many spectators said that it was the first time that they had seen a group with oriental features in the parade, which added novelty to the traditional parade.

Eleanor Johnson, who has been watching the parade for 35 years, said she was nicely surprised by "the Chinese group." Tom Brown, another local resident, said that he was happy to see them. He voted for the Falun Dafa group as the best entry in the parade.

Tom Kerr mentioned that the Falun Dafa Association also brought the message about NTDTV's Holiday Wonders show to the people of Baltimore, a pleasant surprise for the local residents.

Baltimore, a seaport city located in the eastern United States, is 60 km from Washington, DC. It has been a tradition for 35 years for the people in Baltimore to hold the Mayor's Christmas Parade each year on the first Sunday in December. The Mayor led the parade for the two-and-a-half-mile route, marching along streets through the busy downtown. The spectators, including local people and people from surrounding areas, numbered more than ten thousand. This annual parade also kicks off the start of the city's Christmas celebrations.