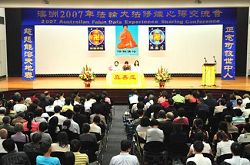 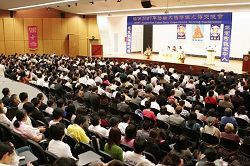 On December 16, 2007, the Australian Fa Conference was held at West Sydney University. Twenty three practitioners shared their cultivation experiences. Revered Master sent a congratulatory message to the conference, and the attendees warmly applauded it. 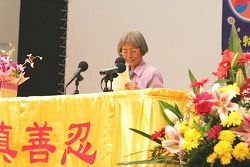 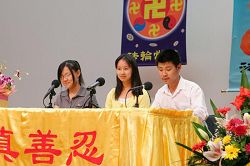 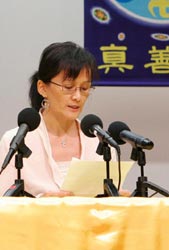 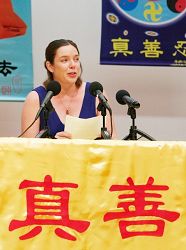 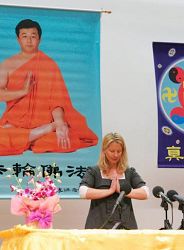 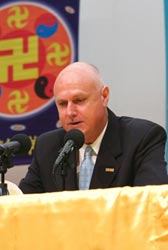 Practitioners are sharing their cultivation experiences

Wang Xiaowei of Sydney started practicing Falun Gong in 1999. He shared his experiences of how to be a diligent cultivator. He said that solid faith in Master and the Fa is very important for a cultivator. The Fa is the ladder for a cultivator to go to heaven, so cultivators should respect the Fa and study it diligently. He mentioned that he had slacked off during cultivation, but he realized the danger of deviating from the Fa. He said that Master wants practitioners to be as solid as steel, and he enlightened that for iron to become steel, it needs to go through a difficult process and that is the process of getting rid of attachments.

John Deller, a Western practitioner, shared his experience of looking inward. He used to be the chair of Falun Dafa Association in New South Wales, and now he is a member of the Falun Dafa Association in Sydney. He enlightened that doing things is not cultivation, and cultivation requires one to look inward for attachments. He also shared his experiences of how to clarify the truth to government officials and Chinese tourists.

Ah-Xue, who clarifies the truth at the Service Site of Quitting the Party in Chinatown, shared his experiences of how to convince Chinese people to quit the party. Practitioners used to set up the service site in Chinatown every weekend, but since more and more Chinese tourists are coming to Australia, practitioners come to Chinatown every day now. They work very hard and have very little time to do the exercise and study the Fa. But practitioners realized that only studying the Fa well can help them to clarify the truth and save people.

Ms. Huang of Brisbane shared her experience of doing the exercises every day, 365 days a year.

Several Western practitioners shared their understandings of how to cultivate in daily life.

Liu Jie shared her experiences of clarifying the truth and improving xinxing during the process of doing business for a practitioner-run media. She had a better understanding of Master's poem "Unimpeded:"

"The paths of cultivation are varied;
But none is outside the Great Law;
When one is attached to nothing;
The path underfoot is naturally smooth." (Hong Yin II, Version A)

She realized that the cultivation paths are different for everybody, but no matter what environment we are in, we should cultivate well with our righteous thoughts. 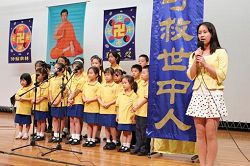 Practitioners in Australia will study the Fa and do the three things well, and be worthy of Master's benevolent salvation.