Germany: "Finally I Found You!" (Photos)

Falun Gong (also known as Falun Dafa) was introduced to the public in China by Mr. Li Hongzhi in 1992. In seven short years, nearly one hundred million practitioners, irrespective of age, sex, or nationality, benefited a great deal from this cultivation practice. In July 1999 however, the Chinese Communist Party (CCP) started a brutal persecution. In their spare time Falun Gong practitioners all over the world have explained the facts to people about the beauty of Falun Gong, its popularity internationally and the brutal persecution happening in China. 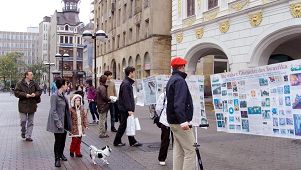 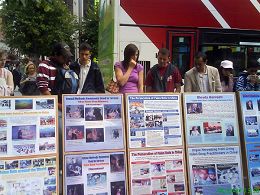 One of the most common methods used to explain the facts is an information day held on the streets, where there are various materials with information about Falun Gong, petition forms calling for ending the persecution, photos from before the persecution when Falun Gong was tremendously popular in China, and photos of how it is currently practiced in over eighty countries around the world. Various truth-clarifying materials which expose the CCP's brutal torture of Falun Gong practitioners are also available. Here people can learn about Falun Gong and the facts about the persecution. They can also express their righteous support for practitioners. Some with predestined relationships have also learned the practice here.

In November 2007 at an information day in Leipzig, Germany, Falun Gong practitioner Mr. Wang had the following touching experience:

"When our information day was about finished an older German gentleman came up to our table excitedly. His first words were, "Finally I found you!" which surprised us. He asked where our books were. During previous information days, many Germans were interested in Falun Gong, and wanted to read our books. Thus I did not stop to think before handing him a leaflet with details of how to buy the books through local bookstores. Later he produced a notebook. Opening the notebook to a page, he pointed to some Chinese writings in it, and asked, "Take a look. Is this you?" What was written in the notebook were three Chinese characters, "Truthfulness, Compassion, Forbearance," followed by the name of a practitioner and a date from five years ago. Seeing this, I asked the gentleman curiously, why these characters were written there. He replied by saying that five years ago he got to know a Chinese person in Leipzig who happened to be a Falun Gong practitioner. That was how he came to know about Falun Gong and the persecution in China. When they parted ways, that fellow practitioner wrote the three characters, "Truthfulness, Compassion, Forbearance," in the notebook. Afterwards, the gentleman learned that there was indeed such a traditional Chinese cultivation method that benefits both mind and body in the world and he remembered the three characters."

"Since the older gentleman did not know how to use modern communication tools nor could he get onto the Internet, for five years he tried many times to find information about Falun Gong to no avail. But obviously he did not forget "Truthfulness, Compassion, Forbearance." Today, he finally saw these three characters on a display in passing. Thrilled, the gentleman took a copy of every kind of material from the table, carefully inserting them into his notebook. He also took down details of Falun Gong practitioners to stay in touch."

"Before he left, the gentleman gave us a white candle. I did not think much about it at the time and said to him, 'We do not need this candle.' But he insisted that we did need it. After he left, I held the candle and realized what he meant. In Germany, especially in churches, people would light a candle when they pray. So it seemed that the gentleman knew the truth. Meanwhile he gave us his blessings."

A chance-meeting with a practitioner five years ago introduced the gentleman to Falun Gong. Five years later, an information day finally gave the predestined person a chance to learn more about Falun Gong.

During information days, practitioners often answer questions such as what is Falun Gong, why the CCP persecutes Falun Gong, etc. Some who had asked the questions started practicing Falun Gong after their questions were answered. Later they started answering the same kinds of questions. This was the case for a young practitioner from the Netherlands, named Jasper. The first time he heard about Falun Gong was in Australia, thousands of miles away from home.

"It was a year and a half ago. I was in Melbourne, Australia at the time. A Chinese lady was giving out newspapers and offered me a copy. I asked, 'Thank you, but what is the content of this newspaper?' She replied that the paper talked about the persecution of Falun Gong. I asked, 'What is Falun Gong?' She explained that Falun Gong is a meditation exercise, and those who practice Falun Gong in China are being persecuted. I was very interested. She told me that there was a group practice site in Melbourne, and they exercised in a park every Sunday morning. The next day happened to be a Sunday. I went to the park and was taught the exercises and given an English version of the book Zhuan Falun. That was the first time I came into contact with Falun Gong. The first time I heard about Falun Gong was when the lady explained it to me. I found it very interesting the first time I did the exercises and read the book, Zhuan Falun. Many things that I did not know about before became clear."

After returning to the Netherlands, Jasper looked up Falun Gong contact information on the Internet. Having got in touch with one lady, he learned that there was an information day that Saturday. He attended the activity and met many practitioners who told Jasper that the purpose for holding events like this was to inform people of the persecution of Falun Gong practitioners in China. There were also many other kinds of activities. "I started supporting such activities. Initially we held such events almost on a weekly basis in various places in the Netherlands. We gave out leaflets, and talked to passersby to tell them about human rights issues in China."

“Switzerland: Clarifying the Facts about Falun Gong to Chinese Tourists in Lucerne (Photo)”