New Tang Dynasty TV's Holiday Wonders and the Chinese New Year Spectacular, performed by Divine Performing Arts, will be staged in more than sixty cities around the world this season. The global tour begins at the Beacon Theatre in New York City and the Lyric Opera House in Baltimore, Maryland, on December 18, 2007.

On the occasion of the season's first performances of NTDTV's Holiday Wonders and the Chinese New Year Spectacular, New York State Assemblyman Robert Reilly wrote a letter to the president of NTDTV, to recognize NTDTV for their great contributions in preserving and promoting traditional Chinese culture. Below is the text of the letter.

It is with great pride that I recognize New Tang Dynasty Television which faithfully devotes their resources to improving the lives of those they serve and to promoting, preserving and sharing their cultural heritage.

The New Tang Dynasty Television is an organization of such noble purpose and resolve and justly merits the honor and commendation of the people of the State of New York upon the occasion of the performance of NTDTV's 2008 Chinese New Year Spectacular - Holiday Wonders.

New Tang Dynasty Television's already legendary Chinese New Year Spectacular seeks to make traditional Chinese values known to the Western world and is presented in celebration of the Chinese New Year, the most important day of the year for the global Chinese community, which this year welcome the Year of Rat on February 7, 2008.

My best wishes for a healthy and prosperous New Year. 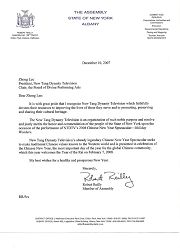