(Clearwisdom.net) The first show of the Holiday Wonders will be held by NTDTV in New York City and Baltimore on December 18. On December 13, Divine Performing Arts held a press conference at the Waldorf-Astoria Hotel in Manhattan, New York City. Several major dancers and singers met the media. Mr. Guan Guimin, director of the company, said that by demonstrating the beautiful, pure and compassionate traditional Chinese culture, the show is one of the most unique performances in the world. TheÂ group will hold the shows in more than 60 cities around the world, and more than 600 thousand people will watch it. 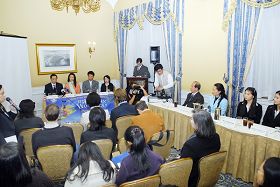 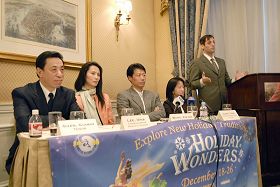 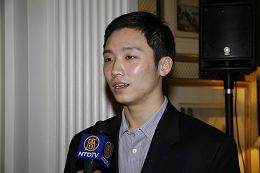 Liu Tianyi, a dancer of the company 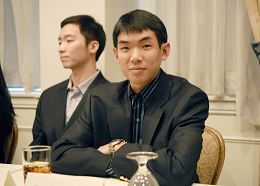 Zhao Liang, a dancer of the company 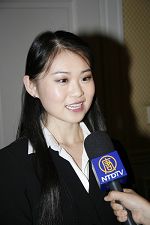 Su Xianzi, a dancer of the company 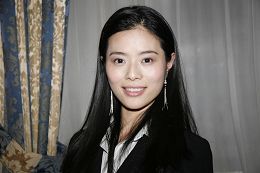 Xiong Junxiu, a dancer of the company

The Purpose of the Show is to Revive Traditional Chinese Culture

Mr. Guan Guimin expressed that the shows will not contain any "Party culture," referring to the negative influence of the Chinese Communist Party (CCP) on modern Chinese society. The members are Chinese artists living in North America. Mr. Guan said, "Our purpose is to revive the traditional Chinese culture."

Mr. Guan said, "Chinese people had the tradition of respecting gods and nature, but the CCP promotes a fighting culture and has ruined the traditional Chinese culture. Artists in China do not have freedom to create pure Chinese arts."

Mr. Guan also said, "Many members were freed of Party culture after they came to Western society and were exposed to ideas and values that they could not find in China."

Mr. Wang Xuejun said, "It is very easy to judge if a performance is traditional and pure or not. Everyone has compassion in his heart. The performances are pure and traditional if they can truly touch people's hearts."

Mr. Chen Rutang, the conductor of the Tianyin Orchestra, is the former director of the Symphony Troupe of the China Central Orchestra, principal cellist and first-class national performer in China. He said that many Chinese artists in his generation were persecuted by the CCP, so many of them are willing to do something to revive traditional Chinese culture.

Dancers: "We are proud to be involved."

The main dancers and dance director of the company, Wang Xuejun and Li Weina, graduated from Beijing Dance College. They played Yue Fei and Yue Fei's mother in the gala last year. Wang Xuejun said that Holiday Wonders is unique because it is the only large scale performance which showcases pure traditional Chinese culture.

In 2007, Divine Performing Arts toured in more than 30 cities in North American, Australia, Asia and Europe and held more than 80 shows. More than 200 thousand people watched the performances. The audience was very touched by the performances, and many were moved to tears. The public and media gave very favorable reviews of the shows.

Media reporter: "You have done a lot to promote Chinese culture."

Young dancers: Striving to be a good person first, then a good dancer

Some members grew up in North America. How do they understand Chinese culture? Xiong Junxiu, the dancer who played Guanyin in the shows last year, came to America after high school. She said that the CCP's education of Chinese history is empty and brainwashes students. Xiong Junxiu was criticized for lacking compassion and smiling during the rehearsals last year. She looked inward and realized that to be a good performer, she needs to be a good person first, and to play Guanyin--a compassionate god, she herself needs to be compassionate.

Holiday Wonders Will Bring New Surprises to the Audience

Ms. Chen Ying, the stage director, said that the tickets were sold out last year, and they had to add a few extra shows in Taiwan to satisfy the audience. She summarized the reasons why the shows were so popular and highly evaluated: 1) The historic stories are touching; 2) The artists are very professional and skillful; 3) The orchestra perfectly combines Eastern and Western instruments and music; 4) The stage background was elaborately designed.

Ms. Chen said that the audience was surprised by the combination of traditional arts and modern high technology.

Ms. Chen also mentioned that theÂ company will split into two sub-teams to tour in more than 60 cities this year.

Li Zong, the CEO of NTDTV, said that the shows this year will bring surprises to the audience again.