Little Pengpeng is six years old and currently in grade one. He used to live with his dad, Sun Jinghuan and his mother, Yi Luju, in Dalian City, Liaoning Province. However, his parents were illegally arrested by the CCP (Chinese Communist Party) police many times because they refused to give up practicing Falun Gong.

Pengpeng's greatest wish is to be with his parents forever and for his parents to not be taken away again by the police. 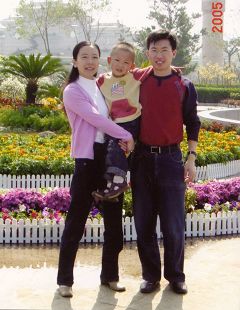 When Pengpeng and his parents were all together 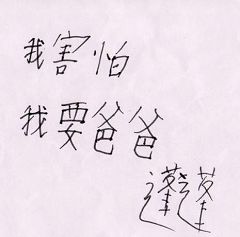 Again, this year Pengpeng will not see his mother for a long time. His father told him that his mother was arrested and taken to a brainwashing center because she wrote a letter to the police saying that Falun Gong is good. A few days later, Pengpeng finally got to see his mom. Not long after that, however, the police took his father away for the second time. On the morning of November 16, his father was taking Pengpeng to school when three policemen stopped him. He tried very hard to comfort Pengpeng, who was wailing at the scene. Eventually the police took his father away. Pengpeng was taken home by some kindhearted passersby. When his mother opened the door, Pengpeng told her in tears, "The police took Daddy away!"

There are many things Pengpeng cannot understand. His mom and dad have not done anything wrong. His grandmother recovered her health after practicing Falun Gong. Why do the police arrest his parents? Pengpeng often woke up in the middle of the night with nightmares. Even when he was playing with toys, Pengpeng would think of his father, then he would cry to his mother, "I want Daddy!"

Pengpeng did not get to see his father until he was three years old. One month before he was born, Pengpeng's father was arrested by the police. When he was a baby, he and his mom moved to another city to avoid the police. Pengpeng usually speaks to other kids with pride that he has traveled on trains, in cars, on ships, and even tractor trailers. The only thing he has not experienced yet is an airplane.

When Pengpeng was a year old, his mother had to go to work, so he was sent to a boarding school kindergarten and only went home on weekends. Each time the school bus came to take Pengpeng, both Pengpeng and his mother would cry. At night at the school, Pengpeng looked around the empty room and at the darkness outside and was very scared. Pengpeng missed his mother so much. He would imagine being with his mother. How happy he would be!

The kindergarten teachers asked why his father never came. Pengpeng also asked his mother many times, "Do I have a Daddy?" Mother would take out his father's photographs and say: "Pengpeng, you have a father, and he is a very kind and capable person. He is now in a very distant place, but soon you will be able to see him." Seeing other children together with their fathers, Pengpeng could not help but envy them.

When Pengpeng was three years old, his father returned home. Pengpeng hid behind his mother, watching this strange but also familiar face, with a mixed feelings of happiness and nervousness. Walking on the street, he could finally be like other children, holding the hands of his mom and dad at the same time. Pengpeng felt that they were the world's happiest people. Pengpeng tightly held their hands with his little ones, afraid that if he let loose, his father would disappear again.

Ever since his father returned, the quiet Pengpeng started to speak and laugh more. He and his father play games such as "horsey rides." His father also told him stories. Later on his grandmother also came to live with them. The family of four was happy every day.

Ever since then, whenever he sees the police or a police car, Pengpeng feels afraid. Pengpeng said to his father, "The police are bad people. Grandmother was telling the truth. Why would they arrest her?" His father said, "The police persecute Dafa disciples because they believe the lies. Many of them no longer participate in persecuting Dafa disciples after learning the truth. Some of them even secretly protect Dafa disciples." His dad also told Pengpeng, "Do not hate the police who arrested your grandmother. Practitioners should be compassionate and have mercy. People who have done bad things will suffer karmic retribution. They are the most pitiful people."

However, his father was arrested again. Many people said to his parents, "You should think of your son." Pengpeng also asked them, "Why did they say that you do not think about me?" His parents said to him, "We hope you and children all over the world can live in a world with no lies, and no persecution and can live in happiness. For that to happen we should bring "Truthfulness, Compassion, Forbearance" to people. When people do not believe the lies and know how to be good, the world will be a better place." Pengpeng understood his parents. They are not just thinking of their own son, but of of all the children in the world. They are right and they are great parents.

Pengpeng's mother is very strong-minded. She wanted to go to the police station to ask for his father's releaser. She asked what Pengpeng thought about this. Pengpeng asked his mother to fulfill his wish, "Ask everyone you meet to please help our family. Kind people will receive good rewards."

Postscript: Pengpeng's mother, Ms. Yi Luju, had about 1,000 thousand yuan deducted from her salary after being taken to a brainwashing center. Her work unit might not renew her contract when it is up next year. Now that his father has been arrested, the whole families' combined savings is less than 2,000 yuan. Their monthly mortgage alone is about 2,000 yuan. The family is under great financial strain. Ms. Yi is carrying the burden on her shoulders. Six-year-old Pengpeng, after experiencing so many hardships, is now facing even more difficult times. Who can heal the wounds in his heart?

To those people who are still following the CCP's orders and participating in the persecution: You have your own families to think about. Act from your hearts. I believe that you can feel what this inhuman persecution has done to so many families and innocent children. These ordinary people like Pengpeng's parents are risking their lives to let people know the truth and to tell them not to conduct themselves in an evil manner due to ignorance.

Dalian police officer Liu Xiaofeng, who recently participated in the persecution of Falun Gong practitioners, had a car accident with two other people in the vehicle. He was the only one who died. A person deceived by the CCP lost his future. When it comes to the issue of eternal life, should one not be careful? I sincerely hope that government officials and the police will not continue to hurt Dafa disciples. Awaken and choose a bright future.

“Nine-to-Fivers Should Do the Three Things Well, Too”