The Epoch Times reported on the civil claims case in which two Falun Gong practitioners have charged Jiang Zemin and two other former CCP senior officials for torture has made significant progress. The High Court of Hong Kong granted the case Leave to Serve Out of Jurisdiction on August 9. The lawyer for the plaintiffs has prepared the Chinese translation of all required legal documents, which have been reviewed by the High Court. Falun Gong practitioners hope that the Hong Kong courts abide by justice, break through all the interference, and have the three defendants served through the court in China as soon as possible. 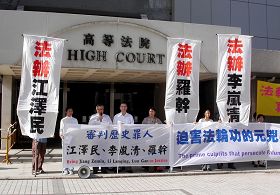 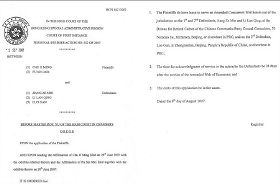 The two Falun Gong plaintiffs, Mr. Chu O Ming and Ms. Fu Xueying, filed the lawsuit with the High Court on June 28, 2007. The suit is against the CCP's former president, Jiang Zemin; former Chinese deputy premier, Li Lanqing; and the former secretary of the Politics and Law Committee, Luo Gan, accusing them of committing torture, assault, illegal imprisonment, abuse of power, and other crimes for civil compensation. The case has attracted a great deal of attention, since it is occurring in Hong Kong, which is under the control of the Chinese Communist regime.

Translation of the Legal Documents Prepared

On the afternoon of December 11, Mr. Chu O Ming and Ms. Fu Xueying, the two plaintiffs in the civil claims case against Jiang Zemin and two CCP senior officials, marched with dozens of other Falun Gong practitioners from the Charter Garden to the High Court, where they held a press conference. They announced that the High Court of Hong Kong approved Falun Gong's application to serve the lawsuit to the defendants in China, as it has granted Leave to Serve Out of Jurisdiction on August 9 of this year.

All the Chinese translations of the legal documents have been made ready. The lawyer for the plaintiffs is waiting for the High Court of Hong Kong to serve the three Falun Gong plaintiff's civil claim to the three defendants, in accordance with the arrangements and agreements between Hong Kong SAR and China regarding mutual assistance in the serving of legal documents in commercial matters, which was signed between Hong Kong and China in 1999. According to the stipulations, the commissioned entity, i.e., the High Court of the People's Court of China, is responsible for serving the legal documents to Jiang Zemin, Li Lanqing, and Luo Gan.

Chu O Ming, one of the plaintiffs, praised the Hong Kong Court's courageous and righteous move on August 9 of this year. He also expressed his appreciation.

He said: "The decision by the High Court of Hong Kong, which served to uphold justice and safeguard the impartiality of the judicial branch of government and at the same time to safeguard the reputation of the judiciary independence of the High Court of Hong Kong, is a great deed. This will not only set an example for the world, and increase people's confidence in Hong Kong, but it will also benefit everyone involved in this decent decision. This will inevitably lead to more positive attention and praise from the international community and the people of Hong Kong. "

Chu O Ming additionally made clear his hopes that the High Court would do better and better, "This is not only a test for Hong Kong's 'one country, two systems' and the independence of the judiciary, but also a test for democracy, human rights, the administration of justice, and the credibility of the government in China."

He said that this is the eighth time he has filed similar complaints against the defendants since the first time he filed against Jiang with the Chinese High Procuratorate and the High Court as early as August 2000 in Beijing.

Mr. Chu stated: "I sincerely hope that people all over the world will pay attention to the cases that have been filed against Jiang for almost eight years and which have cost all of the plaintiffs a painfully high price. I also sincerely hope that the Hu Jintao and Wen Jiabao regime will bravely acknowledge that the persecution of Falun Gong in China was a mistake, bring and all the culprits to justice soon, and end the eight-year-long repression and persecution of Falun Gong.

The other plaintiff, Ms. Fu Xueying, said that she was very pleased to see the case moving forward: "I think this is very encouraging for the large number of the Falun Gong practitioners who are still being persecuted in China. The decision of the High Court is great."

Urging the Timely Implementation of the High Court Ruling

The spokesperson for the Hong Kong Association of Falun Dafa, Jian Hongzhang, urged the High Court to expeditiously implement the August 9 ruling, saying, "We hope that the Hong Kong courts will abide by justice, break through all interference, and carry out service of the legal documents to the three defendants as soon as possible."

The decision of the High Court of Hong Kong to serve these legal papers, out of jurisdiction, to defendants through the court system in China is a successful legal action that enables overseas lawsuits filed against Jiang and the named plaintiffs to reach the defendants in Mainland China. The serving of this writ to China, according to the Falun Gong group, will shock Jiang's gang.

Prior to this, the Court of Australia in November issued a default judgment against the Minister of Commerce, Bo Xilai, for his perpetration of international crimes of torture. Shortly afterward, the Spanish Constitutional Court accepted the Falun Gong group's criminal case against Jiang Zemin and Luo Gan for committing genocide, torture, and crimes against humanity, based upon a theory of universal jurisdiction. The court has now initiated a formal investigation.