On December 9, 2007, many Koreans gathered in Cheonan City, Chungnam, Korea, to hold a rally and parade to celebrate 29 million Chinese people having quit the Chinese Communist Party (CCP) and its affiliated organizations. They also celebrated the third anniversary of the publication of the "Nine Commentaries on Communist Party." Before the rally, a military veteran of Korean ethnicity who recently came to Korea from China made a phone call to the Korean Service Center for Quitting the CCP and said that he would quit the CCP with his real name and, using his courage, call on more Chinese people to not be deceived by the CCP.

Rally before the parade 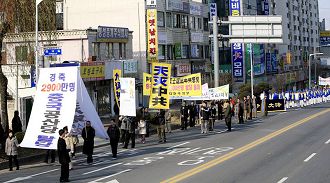 Parade in Cheonan City, Chungnam, Korea, celebrating 29 million Chinese people who have quit the CCP and its affiliated organizations 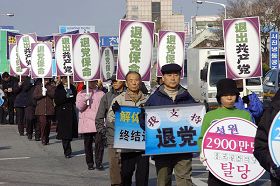 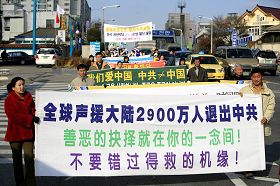 The banner says: "Global support for the 29 million Chinese people that have quit the CCP and its affiliated organizations. Your choice of kindness or evil depends on your one thought. Don't miss this opportunity to be saved."

What the Nine Commentaries Describes Is True

The elder veteran said he had read the Nine Commentaries in China and initially had a few doubts. Later he visited many friends in Beijing who were from families of high level CCP officials. They all said they had read it. They all investigated and analyzed it for three months. Their conclusion was that all of the descriptions in the Nine Commentaries are true.

The veteran continued to say that he had participated in several wars, one against the former Soviet Union and the other against Vietnam. On June 4, 1989, he was in Beijing by coincidence and saw for himself that the CCP army killed students on Tiananmen Square. An army commander in Beijing declined to execute Deng Xiaoping's order to kill the demonstrating students. Leader Deng Xiaoping had to order troops from other places to crush the peaceful demonstrators.

He said that his grandfather and father were born in Korea. His father was persecuted to death during the Cultural Revolution because he was born in Korea. So he was still indignant toward the CCP on this issue.

He said, "The CCP has persecuted people since Mao's time. It's been one bloody movement after another. Jiang Zemin initiated the persecution of Falun Gong. The removing of organs from living practitioners is unspeakably cruel and horrible."

Regarding the 29 million Chinese people that have quit the CCP and its affiliated organizations, he agreed with and praised them. He indicated that he would select a time to stand up in public and quit the CCP with his real name. He said he had nothing to fear since he is old. He said that his public appearance would get the attention of more people and keep them from continuing to be deceived by the CCP.

The Nine Commentaries has been in circulation for three years, and many Chinese Koreans have quit the CCP using their real names.

At the rally celebrating those who have quit, Ms. Gao, a representative from the Korean Service Center for Quitting the CCP, told the reporter that it was estimated that the number of people quitting the CCP was increasing each month. Among those who quit in November, nearly half of them announced their withdrawals using their actual names instead of aliases.

Representatives of local organizations made speeches on this third anniversary of the publication of the Nine Commentaries and the meaning of disintegrating the CCP. Local residents expressed their sympathy towards Falun Gong practitioners after looking at the reenactment of the CCP's torture of practitioners.

Mr. Ang Choon Kheng, a local resident, said, "I protest such infringement of human rights as this live organ removal. Though we are from different ethnicities, no one, as a human being, can do this."

A student, Kim Dongwan, said, "It is horrible. How could I face such a horror as live organ removal? This makes me feel terrible."

Cheonan City is the center of transportation and education in central Korea. This was the first time such an event has been held in this city. Many local organizations participated, and local residents watched the parade and read the flyers.

Mr. Ang Choon Kheng said, "I think that spreading the news about the importance of quitting CCP in this manner will allow those who don't know to learn about it quickly."