On November 4, 2007, the Falun Dafa Association of Canada held the second Divine Land Marching Band Experience Sharing Conference. At the conference, a number of practitioners shared their experiences of rehearsing and participating in community activities with the band. Practitioners also talked about utilizing media reports to publicize their activities, thus helping more people learn about and understand Falun Dafa. Finally, they shared their personal experiences of cultivation through being part of the Divine Land Marching Band. 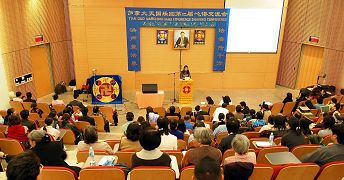 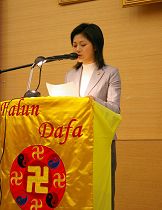 A practitioner who studies at a university near Toronto shared how he eliminated the attachment of laziness that had formed over a long period of time, and changed the living habits which had once been set in his mind. He previously played the French Horn, and needed to practice one to two hours every day, on top of group practice. It took him three years to reach a certain level of proficiency. Upon joining the Divine Land Marching Band, he was told that he had to change his fingering technique, yet he felt uncomfortable with the thought of changing the technique he had been using for ten years.

This practitioner shared, "I know this is all due to support from Master. As long as our hearts are in the right place, if we go and do it, we will see miraculous effects." He also discussed how he changed the solid notion that, "One must sleep at least eight hours a day." He said, "In the past, every morning before I got out of bed I would count with my fingers to see whether I had slept for seven hours. If I found it was not enough, I would become tired again, but if it had been seven hours, I would feel normal."

"I visited the Clearwisdom website, and read sharings from fellow practitioners regarding this issue. I also heard that some fellow practitioners in the Divine Land Marching Band only slept for three to four hours per day, and still didn't feel tired at the end of a day. However, they all shared a common habit - that is to guarantee time for doing the exercises every day. Therefore, I set a plan to practice the exercises with local practitioners, every day at 6:00 a.m. After two weeks, I would only sleep four to five hours per night, yet felt very energized every morning."

As there are many events that the Divine Land Marching Band takes part in, those who had been involved with reporting on their activities could hardly cope with the workload. One practitioner voluntarily took on the responsibility of taking photographs for the reports. She said, "In every parade with the Divine Land Marching Band, I felt like I had a mission, and was deeply moved by the power of Dafa and the music that was being played. I asked for support from Master to obtain good photos, because I really didn't know how to take good photos." She also shared, "I asked for advice from fellow practitioners again and again. One parade after another, I continuously took the photos. The photos on the Divine Land Marching Band's website have become more enriched, and they play an important role in our applications to enter other parades. It wasn't until some time later that I came to realize that the pure energy that forms through our cultivation can have positive effects through the photographs, even purifying one's body. When people see them, they benefit in both mind and body."

A practitioner who immigrated from China not long ago shared how she has elevated with the help of fellow practitioners in the Divine Land Marching Band. She also shared how they have helped to rescue her relatives who were under direct persecution in China. She said, "With your selfless contributions, I have made it through tribulation after tribulation. Finally, I have reunited with my family member who was being persecuted, and have also found a job in my profession."

“Ms. Zhang Jinling from Shulan City, Jilin Province Has Been Persecuted Many Times”