(Clearwisdom.net) At a press conference in front of the New South Wales Supreme Court in Sydney on November 7, 2007, Falun Gong practitioners announced that the Supreme Court of NSW had issued a default judgment on November 5, recognizing that the defendant, Chinese Minister of Commerce Bo Xilai, had failed to provide a defense for the case brought against him by Mr. Pan Yu. The judgment was in favor of the plaintiff, Falun Gong practitioner Pan Yu. 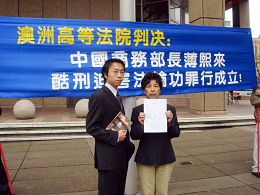 Pan Yu's legal assistant, Newton Xu, showed the verdict that was issued by the Supreme Court of NSW. He said that the court made a default judgment against the defendant, Bo Xilai. The court ruled that plaintiff Pan Yu had won the case, and that he may ask for compensation for injuries caused by the defendant. Mr. Newton stated that for the next step he will assist the plaintiff in preparing additional information, and submit it to the court. This will require Bo Xilai to pay compensation for the plaintiff's tremendous physical and mental suffering caused by the persecution of Falun Gong. The court will issue the final amount Bo Xilai will have to pay.

When the Chinese Minister of Commerce Bo Xilai accompanied Hu Jintao to Australia for the Asia-Pacific Summit on September 4, 2007, he was served a summons in person at his hotel the first day he arrived in Canberra, the capital of Australia. When the court opened for a hearing on October 8, it accepted the testimony submitted by the plaintiff's lawyer, but Bo Xilai did not appear in court, nor send a lawyer on his behalf. The court then ruled against Bo Xilai in the second hearing held on November 5.

The legal assistant of the plaintiff, Newton Xu, believes that the victory in this case has significant meaning. China's legal system is unable to provide people with a guarantee of their basic rights, while in Australia and other democratic countries, this is the court's basic duty; the court is a symbol of justice and fairness. This case can also encourage more people in China to seek their basic human rights. Bo Xilai is the highest ranking Chinese Communist Party official to be found guilty in an overseas lawsuit. This case also serves as a potent reminder to other CCP officials who have participated in the persecution of Falun Gong.

That the defendant Bo Xilai was served a summons but did not dare to appear in court or make any response shows that he is very clear about his active role in the persecution of Falun Gong, that it is against the law and a violation of human rights. If he were to respond, he would have to submit to the court's cross-examination, and accept the verdict. Mr. Newton stated that attempts by high-ranking officials who participated in the persecution to evade trial will fail, and that they will not escape just punishment. Today's judgment against Bo Xilai is a good example. 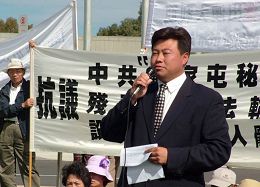 Plaintiff Pan Yu said in an interview that he was very pleased about winning the case. He thanked the Australian court for upholding justice and issuing a judgment against the criminal. He believed that this showed that the CCP's persecution of Falun Gong is against the people's will, and has roused indignation of the world's people. A very recent open letter was addressed to Hu Jintao and Wen Jiabao by a standing member of Anhui Province's Political Consultative Commission, Wang Zhaojun. It requested political reform, and called for an end to the persecution of Falun Gong; this also shows that people have a sense of natural justice.

NSW Falun Dafa Association President Ms. Zhao said that the verdict is encouraging. This is the first example in which an Australian court made a judgment in favor of Falun Gong practitioners regarding the crimes committed by the CCP officials in the persecution of Falun Gong. This will play a positive role in pushing forward other lawsuits filed by other Falun Gong practitioners in Australia, such as the lawsuit against Jiang Zemin, the lawsuit against the secretary of the Guangdong Provincial Party Committee Zhang Dejiang, and the lawsuit against Chen Shaoji. In addition, the victory in this case is also encouraging to millions of Falun Gong practitioners suffering persecution inside China. At the same time, she hoped that this case will also serve as a timely warning to police officers and government officials who continue persecuting Falun Gong in China. She hoped that they will stop their crimes before it is too late.

Spokesperson for the NSW Falun Dafa Association John Deller said the case helps more people learn what Falun Gong is and therefore understand the CCP's real purpose in the persecution of Falun Gong.

Bo Xilai, active accomplice of Jiang in the persecution of Falun Gong, has committed numerous crimes 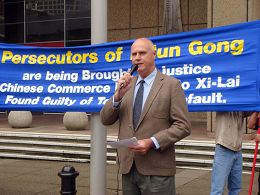 Mr. Deller said that Bo Xilai has committed numerous crimes in the persecution of Falun Gong

He pointed out at the press conference that when Bo was Governor of Liaoning Province, he actively participated in and implemented the genocidal persecution of Falun Gong. Pan Yu was detained at the Longshan Forced Labor Camp in Liaoning Province in 2000 for practicing Falun Gong. During the detention, he suffered all kinds of physical torture and mental torment. On one occasion, the policemen fully charged the electric batons to 40,000 volts and shocked him continuously for around 10 minutes. He was mentally devastated, and nearly lost his life. 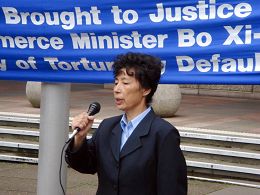 Witness Liu Shuqin in the lawsuit against Bo Xilai

One of the witnesses, Falun Gong practitioner Ms. Liu Shuqin from Dalian, Liaoning Province, said at the press conference that she personally witnessed many of the crimes committed by Bo Xilai, who has been actively participating in the persecution of Falun Gong. Ms. Liu was arrested and detained numerous times after July 1999 for practicing Falun Gong. She was also illegally sentenced to two years of forced labor. When she was detained at the Dalian Forced Labor Camp, she suffered both physical torture and mental torment, including being forced to give up her belief in Falun Gong. She was incarcerated in a small cell for seven consecutive days, and forced to do slave labor to make products for export overseas. She and other Falun Gong practitioners were forced to have their blood tested, a procedure used by the CCP to select victims for live organ harvesting.

The people are against the persecution, and support the lawsuit against chief culprit, Bo Xilai

During the press conference, Australians who saw the banners which were imprinted with messages and displayed outside the court, stopped to watch from the side, and carefully read the truth clarifying material distributed to them. Many people expressed their feelings against the Chinese Communist regime's brutal persecution of Falun Gong practitioners, and voiced their support for the lawsuit against Bo Xilai.

One Falun Gong practitioner who was handing out materials at the time met a friend from Shanghai. This man was very curious about the press conference outside the Supreme Court, and expressed his gratitude upon discovering that Bo Xilai had lost the case. He felt the persecution was wrong to begin with, and it was a very good move to sue Bo and those who played a main role in the persecution. Recently he had also read about the open letter addressed to Hu Jintao from Wang Zhaojun, that called for an end to the persecution of Falun Gong. He said that this showed righteous people inside China have gradually become more willing to speak out.

One cannot escape the condemnation of justice, Investigations and lawsuits follow the will of people and the heavens

Spokesperson for the New South Wales Falun Dafa Association, Mr John Deller said, Bo Xilai has committed serious crimes in the persecution of Falun Gong. He faces lawsuits from Falun Gong practitioners not only in Australia, but in more than ten countries including America, Canada, Spain, New Zealand, Switzerland, Germany, Ireland, Russia, and South Korea. The atrocious crimes he has committed have caused him to be unwelcome in many places of the world.

According to reliable sources, there are forty-seven lawsuits worldwide against Chinese Communist government officials for their roles in the persecution of Falun Gong. Aside from the recent judgment on Bo Xilai in Australia, a number of other lawsuits have been judged in favor of Falun Gong practitioners; these include, lawsuits in America against the Mayor of Beijing, Liu Qi, former deputy mayor of Liaoning Province, Xia Deren, former Minister for Public Security in Hubei Province, Zhao Zhifei, and a lawsuit in Canada against Toronto Chief Consular of the Chinese Embassy, Pan Xinchun, for the crime of libel.

President of the New South Wales Falun Dafa Association, Ms Zhao, hopes these lawsuits will remind people to keep a watchful eye on the severity of the persecution of Falun Gong by the Chinese Communist Regime. She also hopes more and more people will come to understand the truth of the persecution, and stand together to end these crimes of genocide. She feels the main culprits who instigated this large-scale persecution campaign, including Jiang Zemin, Luo Gan, Liu Jing, Zhou Yongkang, and those officials who closely follow the orders of Jiang Zemin, such as Bo Xilai, will be unable to escape history's judgment.