On October 29, 2007, a forum entitled "China's New Genocide: Organ Harvesting in China" was held at the University of Hawaii at Manoa. David Matas, a famous Canadian human rights lawyer, and Kirk Allison, Director of Prgram on Human Rights and Health at the University of Minnesota, were invited to speak. 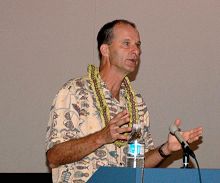 Gary Ostrander, Vice Chancellor of University of Hawaii at Manoa, gives a speech 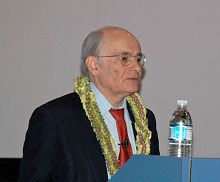 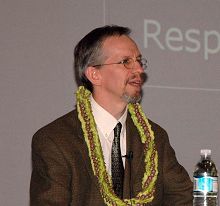 Kirk Allison, Director of Program on Human Rights and Health at the University of Minnesota

Mr. David Matas' presentation was focused on the results of an investigation into allegations of organ harvesting in China. He and David Kilgour, a former member of the Canadian Parliament, co-authored a report after the investigation. The report gave 30 kinds of indirect evidence of the existence of organ harvesting in China. Dr. Allison presented a statistical analysis of the organ harvesting and suggested a deep impact of the phenomenon on international society. He pointed out that organ harvesting is genocide and the persecution of Falun Gong is counter to the Olympic spirit. Dr. Allison emphasized that Falun Gong is the key issue to discussing and understanding the human rights situation in China.

Gary Ostrander, Vice Chancellor of University of Hawaii at Manoa, spoke at the forum. He said that he had read the investigation report by Mr. Matas word for word and said "the issues discussed are serious". That is why he came to give a speech at the forum. He said the authors of the report did not use strong languages but to use facts and evidence, thus setting an example for researchers. Dr. Ostrander thanked Mr. Matas and Dr. Allison and said it is fitting for forum like this to take place at universities, as well as in other places in the world.

More than 130 people came to the forum. Most of them had never heard about the persecution of Falun Gong before.

Bob, an American-born Chinese, and a student at the University of Hawaii, said that he always had negative thoughts about Falun Gong before. After the forum, he realized that all his negative notions were due to the Chinese Communist Party's propaganda. After finally learning the truth about Falun Gong, he asked practitioners many questions, and even said that he wanted to learn the exercises.

Mr. Matas and Dr. Allison expressed their opinion that the forum was very successful. They also said the audience feedback impressed them deeply.

The forum was one of the activities during "Human Rights in China Awareness Week," which was hosted by the Falun Dafa Club and Amnesty International at the University of Hawaii. Chinese Human Rights Week started on October 22. A series of activities were held during the week. Professor Jon Van Dyke from the law school at the University of Hawaii gave a speech on Chinese human rights and the 2008 Olympics. The organizers showed the documentary "The Concrete Revolution," which featured stories life and experience of immigrant workers in Beijing. The organizers of the forum "Falun Gong and the Persecution in China" invited Gwendalle Cooper, Professor Emerita from the San Diego State University to give a speech. In her talk, Professor Cooper analyzed what Falun Gong is and why it has been persecuted in China.

The organizers of Human Rights in China Awareness Week expressed their hope that the increase in awareness created by their activities will bring about an improvement in the human rights situation in China.

“Ran Hengbing, 76, from Sichuan Province Dies in Detention Center One Week After Being Arrested, His Son Still Detained”

“The Untimely Deaths of Two Officials Who Persecuted Falun Gong”