Canadians in Toronto gathered in Dundas Square on the afternoon of October 28, 2007, for an outdoor concert during Human Rights Torch Awareness Week. Organized by the Coalition to Investigate the Persecution of Falun Gong in China (CIPFG), the concert was held in support of the Human Rights Torch Relay, which is traveling around the world. 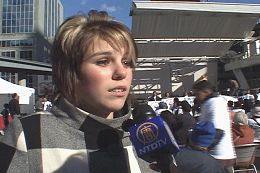 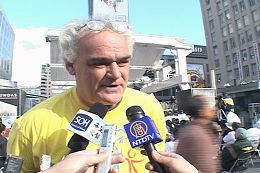 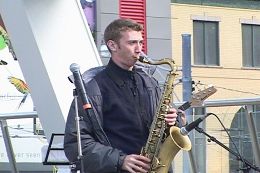 Mr. Dordon Hyland was happy to support human rights with his music 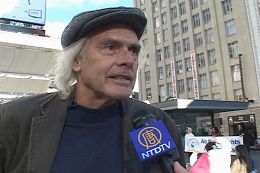 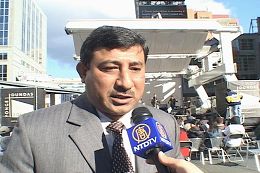 CIPFG announced that if China failed to respond favorably to its three requests by August 8, 2007, it would start a global campaign to boycott the Beijing 2008 Olympic Games. The three requests included:

2. End all repressive measures against people supporting and protecting Falun Gong adherents, such as attorneys Gao Zhisheng and Li Hong;

Since the Chinese Communist Party (CCP) has failed to respond to these requests, the CIPFG initiated the Human Rights Torch Relay in Athens on August 9, 2007. Stating that "The Olympic Games and Crimes Against Humanity Cannot Coexist in China", the activity calls for the international community to pay attention to help stop the human rights violations in China, especially the persecution of Falun Gong. The Human Rights Torch will travel to more than 150 cities in 37 countries on five continents.

Bands, singers, poets, guitarists, reporters, and students from different communities gave performances and speeches at the concert. Through their performances and speeches, they all hoped to raise awareness of the human right violations in China, especially the persecution of Falun Gong, and welcome the Human Rights Torch to Canada next February.

Eighteen-year-old Sarah Melody is a singer of popular music, a human rights activist, and a spokesperson for Youth for Human Rights Canada. She has been recognized by different levels of the Canadian government and a former President for her attention to and education of her peers on human rights.

Sarah and her friends in the music field were very shocked to learn about the organ harvesting from living Falun Gong practitioners in China. She said, "It seems to us it is a terrible massacre." "I am very happy to participate in this activity. I think it is important to get everyone involved." Sarah hopes to welcome the Human Rights Torch to Canada next February.

Mr. Larry Densmore is an actor and a poet. He thinks organ harvesting organs from living people is very cruel and brutish. He said he would certainly be a participant in welcoming the arrival of the Human Rights Torch. "Everyone should join," he said.

Mr. Dordon Hyland from a quartet band at the University of Toronto was very happy to be able to support a human rights cause with his music. "We should boycott the Beijing Olympic Games." All members of his band would like to welcome the arrival of the Human Rights Torch to Canada.

Looking Forward to the Arrival of the Human Rights Torch

Mr. John Layton is a guitar player and folksinger. He said that Falun Gong is a beautiful belief but it is persecuted in China only because the number of practitioners is so large. "Why should the Olympic games be held in a country that treats its own people so unfairly?" He called on the Canadian government to speak out and exert pressure on the CCP. He said for sure he would welcome the arrival of the Human Rights Torch.

Urging the CCP to Stop the Killing

Mr. Ali Bukhari is a reporter from Bangladesh. He said that more than 3,000 Falun Gong practitioners have been tortured to death by the CCP. "Some practitioners' organs have been removed by the CCP regime for profit. This cannot be tolerated."

Ms. Nicole Crellin said her human rights organization would like to join and support the Human Rights Torch Relay to help stop the persecution. She said that many people, including artists, professionals, and people from all walks of life, would come to welcome the arrival of the Human Rights Torch.

“Ukraine: People in the City of Dymytrov Learn about Falun Gong (Photos)”