A reporter for Clearwisdom recently interviewed Mart Laar, the first prime minister of Estonia after the Baltic country gained independence from the Soviet Union in 1991. During the interview, Mr. Laar expressed his support to the Human Rights Torch Relay and appealed to people around the world to pay close attention to the persecution happening in the Communist China. He commended the courage of the Chinese people who have openly denounced the Chinese Communist Party (CCP). He also encouraged Chinese people to be fearless and take solid steps to end the CCP atrocities. 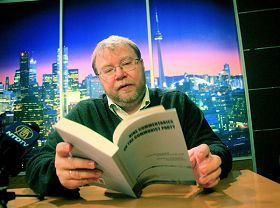 Though the CCP pledged to improve human rights in China when it was applying to host the 2008 Olympic Games, former Prime Minister Laar said that the there was no evidence that the CCP would fulfill its pledge. Mr. Laar believed that the Human Rights Torch Relay would remind people around the world about human rights atrocities happening in China. "It is very effective and very necessary," Mr. Laar said.

Mr. Laar said that the magnificent Chinese history and culture had been mostly destroyed by the CCP. "This destruction can be called the largest damage to the world civilization." He pointed out that history is repeating: During World War II, nobody believed the existence of concentration camps and the Holocaust. Today, organ harvesting is happening and people are still questioning the credibility of the allegation.

Mr. Laar stressed that people in the free world should help people who are still under the communist reign of terror. On the other hand, ignoring their suffering is very dangerous and will harm the whole free world.

He continued that the 27 million Chinese who had withdrawn from the CCP and its affiliated organizations have made a courageous and correct choice. He said: "A classic communist tactic is both persecuting the individual and his family members... In fact, they [the CCP] fear the public. Once the fear among the public vanishes, the CCP reign of terror will collapse."

Mr. Laar said that Estonia lost 20% of its population when it was controlled by the Soviet Union. "It is now widely recognized that communism is anti-humanity. Without violence and terror, communism will not exist," Mr. Laar concluded.

Mart Laar served as Estonian prime minister from 1992 to 1994, and he was re-elected in 1999. He successfully led the economic and politic reformation in Estonia and laid a good foundation for the country to become a member of the EU. He is also a productive historian and is currently serving has a member of the Estonian Parliament.