(Clearwisdom.net) A gray wintry day in London was brightened by a torch of hope on Thursday, October 25. The torch is the symbol of the Global Human Rights Torch Relay. This event draws attention to the human rights abuses committed by the ruling party of the next Olympics host country, China, and resolutely states that "Olympics and crimes against humanity cannot coexist in China."

UK Falun Gong practitioners joined other groups who are persecuted by the Chinese Communist Party (CCP), such as Tibetans and Burmese, in the torch relay to let more people know about the human rights abuses that they are suffering. The event also gathered hundreds of people, VIPs, Olympians and NGOs in Trafalgar Square, who showed their concern over the human rights abuses by the Chinese Communist regime.

One of the event organizers Zek Halu said, "Why do we need this Human Rights Torch Relay for the Olympic games in China? We need it because the Olympic charter calls for the establishment of a peaceful society, concerned with preservation of human dignity. We all know that the Communist regime in China does not care about human dignity and does not care about creating a peaceful society in its own land. Citizens in Communist China do not enjoy the protection of human rights as we do here in the free world."

The Global Human Rights Torch Relay started in Greece in August and passed through 17 European countries. Britain was the last European country the torch visited on its 100-city relay around the world. The relay will end in Asia in August 2008, as the Beijing Olympics are due to begin.

The Vice President of the EU Parliament, Edward MacMillan-Scott said at a press conference before the event: "Since 1999 when the repression began, over 3,000 Falun Gong practitioners have died under torture ... in my view that constitutes genocide. So when people describe the Olympic games in 2008 as the 'genocide Olympics' they normally mean, as does Mia Farrow, in reference to Darfur. When I say the 'genocide Olympics' I mean genocide inside China against religious groups, especially Falun Gong." 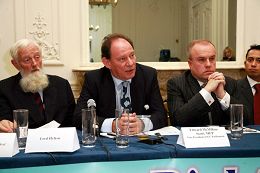 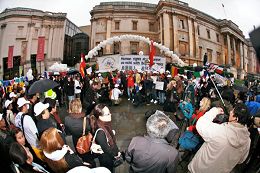 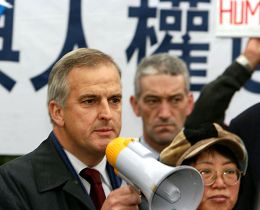 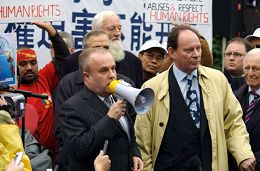 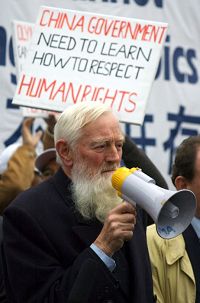 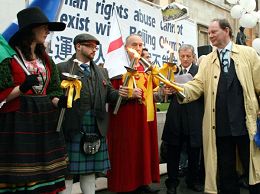 Annie Yang, who spoke at the press conference before the relay, spent two years in a forced labor camp in China for her belief in Falun Gong. In the labor camp, she was only allowed to sleep for 2-3 hours each day, she was given very little food (a half piece of bread at each meal) and at most 500 ml of water each day, despite the very hot temperatures. She was not allowed to wash or change her clothes and was forced to sit upright on a small stool, without moving, for 20 hours each day. She also could not close her eyes or move without permission from the drug addicts who were in charge of watching her.

The day before this event, Ms. Yang learned that a Falun Gong practitioner she had met in the labor camp had just died while in detention. She said "Even last week, the police went to my parents home, still searching for me, asking them where I am. So the situation for practitioners in China is still very dangerous."

The event in Trafalgar square also had musical entertainment including renowned flautist William Bennet, traditional bagpipe music, the London band "Lion Hearted" and a European Choir which sang the theme song of the Human Rights Torch Relay and other moving songs to raise awareness about the genocide against Falun Gong practitioners in China.

Thirty-eight year old Sicilia Sansom traveled from Stockholm to London to perform with the choir at this event. She said "We were invited to come here to sing in this Torch Relay. I think this is a very important event, because it brings up the human rights issues in China. When Beijing received the honor of hosting the Olympic games they said they would improve their human rights issues. And today we know from Amnesty International, Human Rights Watch, the UN and Reporters Without Borders, that the situation has become worse in China with regards to human rights. So I want to support this event."

The event was organized by the Coalition to Investigate the Persecution of Falun Gong but other NGOs also spoke out against the atrocities of the Chinese Communist regime, including the Burmese Muslim Association, the Federation for a Democratic China, the Federation of Saying "Good-bye" to the CCP and Free Tibet.

After the music and speeches, balloons were released and the human rights torch was lit. Representatives wearing traditional English, Welsh, Scottish, Irish and Greek costumes, each holding a lit torch, symbolized the harmonious spirit of the Olympics and led the parade.

When asked about the parade, a 28-year-old bystander named Michael said, "I know what China does to their people and it's crazy that there's going to be Olympic games there."

Kolja, a 35-year-old artist from Berlin said of the Torch Relay, "I think it is very needed because China is a very harsh regime. There's no human rights, no freedom, so it's out of order to have the Olympics there."

The parade containing hundreds of supporters went through the busy centre of London and ended at the Chinese Embassy in Portland Place where a candlelight vigil ended the event on a somber note in the wintry twilight.