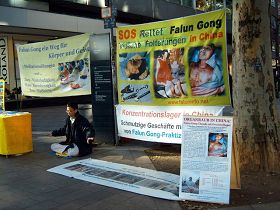 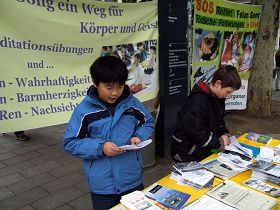 A couple from India approached the practitioners when they were distributing flyers about the organ harvesting. The man explained that he and his wife were Christians. The practitioners said that their goal on this information day was not to convince people to change their faith, but to inform the public that good and peaceful people are being persecuted for their belief and are suffering from organ theft. Before the couple left, the practitioners said, "This persecution is wrong and an outrageous injustice." The couple was quiet for a moment and then nodded their head and said, "Good, we will read the flyer." They said their goodbyes with a friendly smile.

Adjacent to the information booth organized by the Falun Gong practitioners was a booth by the Association for the Environment and Nature Conservation Germany, a registered society which is one of Germany's largest environmental associations. Two young men were responsible for this booth. They called for passersby to donate money and to become members of the Association. They had not heard of the persecution of Falun Gong. After the practitioners told them during a long conversation about the principles of Falun Gong and its persecution, both men told them that the Association not only finances projects and acquisitions with the membership fees, but that they also put pressure on politicians concerning certain causes.

The practitioners took the opportunity to tell them that Falun Gong has no membership and does not accept donations. All materials and expenditures for activities by Falun Gong are paid from practitioners' own pockets. A practitioner told them that the goal of this information day is to inform as many people as possible the facts of the persecution and the crimes committed against Falun Gong practitioners in China. Everyone needs clarification of the true circumstances and the opportunity to speak out for an immediate end to the persecution. This could be achieved by signing a petition, through a letter to their city representative or the federal president, or perhaps through some other way.

There are many opportunities to follow one's conscience and to speak out for an end to the crimes committed against Falun Gong adherents. For example, the owner of a restaurant took some flyers about the organ harvesting and will give them to the patrons of his business. He had approached the practitioners at the information booth and asked, "Why is Falun Gong persecuted so cruelly?" One practitioner answered that the core principles of Falun Gong are "Truthfulness, Compassion and Forbearance", while those of the Chinese Communist Party (CCP) are the opposite of these positive principles.. The man understood immediately what the practitioners wanted to tell him and said, "Yes, understood. I own a restaurant. Please give me flyers and I will display them."

Soon after, a young man, who was bothered by the same question, approached the practitioners. He also wanted to understand why Falun Gong was persecuted so inhumanly. He had been sent to China for one and a half years by his workplace and believed despite the constant state monitoring, the Chinese people could practice any belief. He reasoned that there are hundreds of monasteries, where the monks were allowed to pray. After listening to the explanations at the information booth he agreed to also speak up for an end to the persecution, but didn't think it made much of a difference. One practitioner explained that the more voices would speak out, the greater the potency of the field of truth that would be established. After listening to these words the young man did not say anything more and signed all the petitions without another thought.

Originally published in German at http://de.clearharmony.net/articles/200711/40350.html