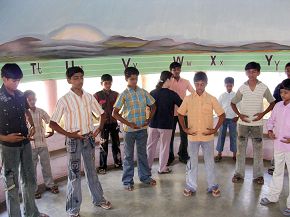 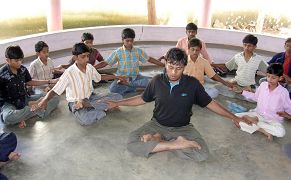 On September 14, 2007, carrying lotus flowers made by fellow practitioners in Taoyuan, Taiwan and with the good wishes from them, my wife and I took a plane to Bangalore, India. On the airplane, I was thinking about how to get by with my broken English. We arrived at the Kuala Lumpur airport in Malaysia after a four-hour flight.

Because we had to wait ten hours for the connecting flight, we got a temporary visa into Malaysia. Local practitioners picked us up and took us to their home to share experiences for several hours. Practitioner Hu was the interpreter. The worries I had, such as how to clarify truth in India without English materials, were dispelled because practitioner Hu provided enough English materials for us. Everything seemed prearranged for us. We took the materials and left Kuala Lumpur for Bangalore, India at 10:00 p.m.

The story of Indian practitioner Chitra

After four hours flight, I finally arrived at the destination. Indian practitioner Chitra and her family, whom we never met before, welcomed us at the airport. We arrived at their home at 1:40 a.m.

Chitra's whole family practices Falun Gong. They all look very kind and warm-hearted. Chitra suffered severe back pain in the past. None of medical treatments that she tried helped. In 2000, a Falun Gong practitioner from another country went to promote Dafa in India. Chitra was curious. This practitioner then invited her to try the exercises. When she practiced the exercises, the pain disappeared. She then started studying the Fa and practicing the exercises every day. Realizing the power and magnificence of Dafa, she started promoting Dafa to others.

She first met a schoolteacher and told her about the wonders of Dafa. This teacher said that she saw the exercise demonstration in Singapore. She wanted to learn but did not get the chance. After learning the exercises from Chitra, she felt great and told the principal and other teachers about it.

The principal learned the exercises and felt great afterward. He then took this teacher's suggestion and taught students the Falun Gong exercises in physical education class. With the permission from principals and teachers, currently teachers and students from forty schools are practicing Falun Gong.

The next morning, after Chitra treated us with Indian milk tea, her husband Bhagawan drove us to the practice site Cubbon Park. 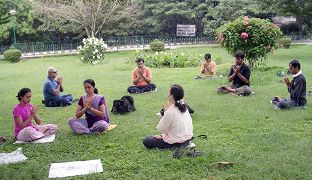 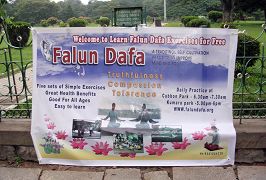 The banners at the practice site at Cubbon Park, Bangalore

On our way, I asked Bhagawan how many people usually showed up for practice. He said that only about three to four attended. Soon after we joined the group, two ladies stopped and watched us. I said in my heart: "Come! Hurry up! It is the time!" Maybe they were predestined to join the practice. They circled around and joined us. My wife and I then showed them how to do the exercises.

After finishing the exercises, they smiled and said goodbye to us. The next day, there were an additional six or seven people that joined us. Wasn't this prearranged? We were busy teaching the exercises and our English seemed to be functional and we could communicate without much difficulty.

After the morning exercises, we returned to Chitra's house and had breakfast. Chitra told us that we would take the bus to Jyothi School to teach the exercises. It would take over two and half hours to get there. It would take another twenty minutes after the bus trip to get to the school. She suggested that we pack a few things and stay there for the night. Her husband Ghagawan took us to the bus station.

The bus station looked very old and every bus looked very bulky. Some even did not have doors. In Taiwan, this kind of bus is usually decommissioned. We started our trip.

The bus left Bangalore and although the roads were paved, there were still many pits and holes. The bus was not only overcrowded, but also was very shaky. We felt as if we were back in the sixties in Taiwan. Passing many cities, towns, large farms and mango fields and seeing many sheep, cows and monkeys, we finally arrived the destination - Chintamani town. It is a village town located in south part of India. It produces mangoes, apples and bananas. Because it is rural, the roads still need to be paved and the houses here are also simple.

All teachers and students in Jyothi School practice Falun Gong

Jyothi School is an English school not far from Chintamani town. After getting off the bus, we took the small yellow van to Jyothi School. After entering the school, Chitra led us to the principal's office. The principal, Father Verkey, warmly greeted us. 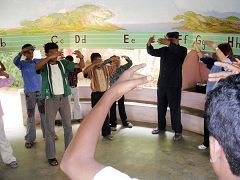 Principal Verkey also asked me how I felt after practicing Falun Gong and how long I have practiced. I briefly told him the changes that took place after I practice Falun Gong. Any medicine or nutrient supplements would not have such effect. He constantly nodded his head. When I told him that I was almost sixty years old, he said: "You don't look that old. You are so energetic." I told him that this was due to the practice of Falun Gong. He was very happy to hear that.

Because on Saturday there are no regular classes, only ten or so students came to school to play ball. When Principal Verkey told them that two practitioners from Taiwan came to teach them the exercises, they curiously gathered in a gazebo and joined the group practice.

We demonstrated and corrected their movements. Although our English was not perfect, we explained over and over with the demonstration. It went smoothly. Chitra told me that four children here had their celestial eyes opened and they could see a beautiful Falun. The Falun they saw is similar to the one in the book. In addition, Falun also appeared in some of the photos they took. This greatly encouraged the principal and teachers including Sugana. It made them more motivated to lead children to do the practice.

While doing the fifth exercise, some children only did half-lotus, single-crossed legs instead of double-crossed, to avoid pain. After we explained the importance of sitting in the double-crossed position, they started to sit in the full lotus position with both legs crossed. They changed so much after two hours of demonstration and teaching. They were truly lovely.

Because we needed to go to another school to teach the exercises, we had to leave. The principal took us to the Chintamani town to catch the bus. It was nearly dark. We waved good-bye to the principal and took the bus back to Bangalore. This concluded our first trip to promote Dafa.

“The Starting Point of Cultivation Is to Be A Good Person”

“Touched and Enlightened by the Performance "Creation"”