Tokyo, Japan: Supporting the 29 Million Who Have Quit the Chinese Communist Party (Photos)

(Clearwisdom.net) On Sunday, November 18, 2007, people from all walks of life gathered in Tokyo to attend a rally and parade to support the 29 million brave Chinese people who have quit the Chinese Communist Party (CCP) and its affiliated organizations. Tokyo council members Takayuki Tsutiya and Koitiro Yoshida spoke at the rally and joined the parade. The parade caught the attention of a lot of passersby and they took truth-clarification fliers about the persecution of Falun Gong in China. 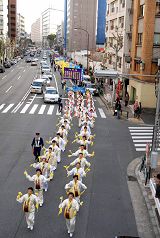 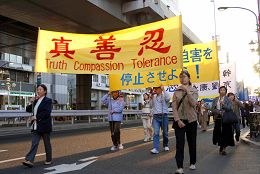 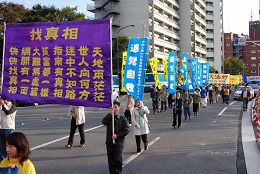 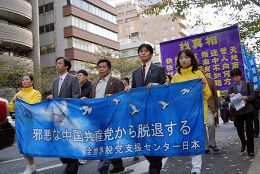 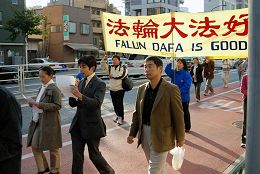 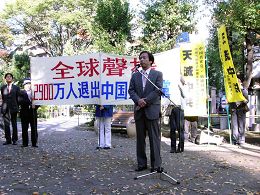 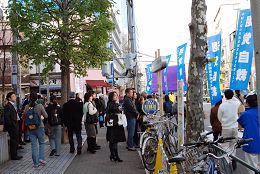 Passersby learn about the CCP's brutality.

A former member of the parliament and an Edogawa District Councilor sent letters to the rally. In the letters, they congratulated the events supporting the 29 million Chinese quitting the CCP and the 3rd anniversary of the publication of the Nine Commentaries on the Communist Party. They also expressed their earnest hope that the persecution of human rights would end soon.

At the rally, Tokyo Council member Takayuki Tsutiya said that he felt sorry about Japanese media and politicians keeping silent about the CCP's crimes. He criticized Japan's national television network NHK for its coverage of China-- reporting on nothing more than illegal house demolition, and keeping quiet on the CCP removing organs from living Falun Gong practitioners. He said, "The CCP is the enemy of all humanity. Let's fight together so we can quickly eliminate and remove it from the Earth."

Exposing the CCP's Crimes during the Parade

The parade lasted two hours and 45 minutes and ended in the evening. The 200-meter long parade started at Ebisu, went by the Chinese Consulate, through the busy Roppongi Street, passed Shinbashi, and ended at Tsukiji. The sound of drums and gongs, music, and shouting of slogans, attracted passersby. Some even joined the parade. Council member Koitiro Yoshida held a megaphone and shouted "Stop persecuting Falun Gong" and "Support the 29 million brave Chinese."

A representative of the Tokyo Global Service Center for Quitting the CCP said that since the Nine Commentaries on the Communist Party was published by the Epoch Times, it has triggered a great wave of people in China to quit the CCP and its two affiliated organizations. So far, 29 million Chinese people have quit the three organizations. In the past three years, the Service Center has held parades to support the movement over 20 times. The activities have helped Japanese people to learn the evil nature of the CCP and get more Chinese people to wake up and quit the party.