On November 17, 2007, Falun Gong practitioners from Phoenix, Arizona took part in the annual "Gilbert Days" parade in Gilbert, Arizona. Thousand of citizens came out to watch the parade. 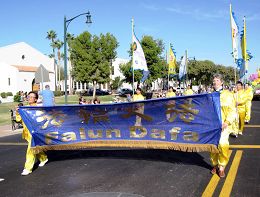 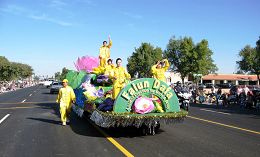 The parade started at 9:00 a.m. Falun Gong practitioners' group was led by a large banner, which read: "Falun Dafa."  Six flags with Falun symbols followed the banner. Four practitioners demonstrated the standing exercises on the float, and one sat inside a handcrafted fabric lotus flower while demonstrating the sitting meditation. An NTDTV float followed the procession, promoting the Chinese New Year Spectacular in Phoenix.

The parade was two miles long. Spectators warmly welcomed practitioners. At every Â¼ mile, there was an announcer introducing groups to the spectators. They not only explained what Falun Dafa is, but also mentioned the brutal persecution of the practice in China.