(Clearwisdom.net) On November 11, 2007, Falun Gong practitioners from the San Francisco Bay Area were invited to the annual Veteran's Day Parade in San Francisco. The Divine Land Land Marching Band's performance was greatly appreciated by the organizers, spectators, and the general director of the parade, Mr. Huang Guoren.

The Divine Land Marching Band performed in front of the main stage.

Falun Gong practitioners demonstrated the exercises in the parade. 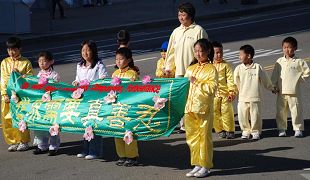 Young practitioners from the Minghui School

The general director of the parade, Mr. Huang Guoren, said that 110 groups participated in the parade, which was sponsored by the San Francisco city government. 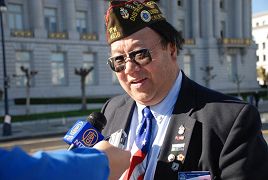 Mr. Huang Guoren, the general director of the parade

He said, "Falun Gong practitioners' performances were excellent, especially their rendition of 'America the Beautiful.'" As to the persecution of Falun Gong in China, he said that Americans, who have freedom of belief, know it is wrong to put people in jail for their beliefs. 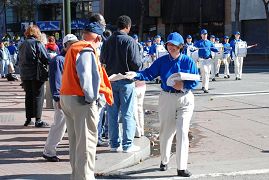 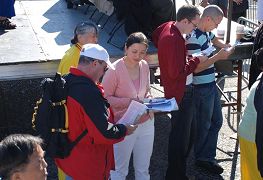 Renie Champagne, the organizer of the parade, said that the band's performances were amazing and the young practitioners' dances were very beautiful.

“Malaysia: People Support the Movement to Withdraw from the CCP (Photos)”