US Congressman: The US Should Not Participate in An Olympics Hosted by A Criminal Government (Photo)

(Clearwisdom.net)US Congressman Dana Rohrabacher made a speech on "National Security and American Foreign Policy" on October 1, 2007 in the House of Representatives. Mr. Rohrabacher pointed out that while the Chinese Communist Party persecutes peaceful Falun Gong practitioners, the United States should not participate in an Olympics hosted by such a criminal government. 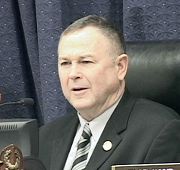 Mr. Rohrabacher said that he would ask his colleagues to join him in support of his bill. He said: "The legislation is H.R. 610. It is a bill suggesting that we go on record as being in favor of boycotting the upcoming Olympics to be held in China."


Mr. Rohrabacher said "the Chinese are the world's worst human rights abusers, and why should we ever hold an Olympics, which stands for some of the higher aspirations of humankind-- why should we ever hold an Olympics in China while it has that type of monstrously dictatorial government. Yes, in China they not only are involved with repressing the people of Burma, but they are deeply involved with criminal acts against their own people, especially against religious believers."

When talking about the suppression in Burma, Mr. Rohrabacher said: "Those who would try to lead the country to a better and more Democratic way are those Buddhist monks
who now, in a very peaceful way, have presented their case, and are answered with an iron fist. They are answered by bullets, they are answered by brutality."


Mr. Rohrabacher said: "In China, it's the same. We have people of religious faith,
whether they are Muslims in the far reaches of China or whether they are people in Tibet, who have been so brutalized, or other religious believers, Christians, Catholics, and, yes, the Falun Gong, [...] this very simple and pacifist religion has been vilified by the communist party of China, and thousands and thousands of Falun Gong practitioners [...] have been arrested. They are picked up, and they disappear."

"The women are raped in prison; they are murdered. Perhaps worst of all, when they disappear, they are sent to prisons, and now we have reports coming out of those prisons that Falun Gong prisoners, people who are pacifists, [...] they are, what? they are being murdered for their organ parts which are then being sold."

Mr. Rohrabacher continued, "If there is anything more ghoulish than this, even the Nazis, I don't think, could sink that low, but they sank about as low as one could ever expect. But that is the type of thing that goes on today, and we are giving the Chinese the ability to hold the Olympics, to cover up, to put a good face on this type of monstrous regime."

Mr. Rohrabacher said, "It is time for the people of the United States Congress to join with me in agreeing that as long as China is doing number one, what it's doing in Burma and in Darfur, where they are again behind the scenes playing a horrible role, it is time for us to join together and say we will not participate in an Olympics hosted by such a criminal government."