On October 17, 2007, the Human Rights Torch Relay, with the purpose of raising awareness of the persecution, arrived in Dublin, Ireland. Many politicians and people were there supporting the event. Dr. Declan Lyons, a doctor from St. Patrick's Hospital in Dublin and a member of the Coalition to Investigate the Persecution of Falun Gong (CIPFG) gave a speech at the rally. 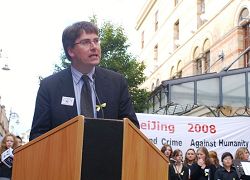 Dr. Declan Lyons stated that he was shocked by the persecution.

Dr. Declan Lyons said that he was shocked by the fact that Falun Gong practitioners have been persecuted because of their belief in "Truthfulness-Compassion-Forbearance." He emphasized that the international community should take action to stop the persecution. He said if people keep silent then we will enter a dark and evil era.

Dr. Lyons said that he himself is not a Falun Gong practitioner. He pointed out that practitioners are suffering from the most brutal persecution inflicted by a state, which reminds people of the persecution of Jews by the Nazis. Dr. Lyons said that in the last eight years, he has taken some action, but his anger toward the persecution has only increased. He said that many Falun Gong practitioners have been sent to mental hospitals because of their spiritual beliefs. He pointed out that psychiatrists are supposed to help people with their mental problem, but in China, it has been used as a tool to persecute people.

Dr. Lyons mentioned the investigation reports about organ harvesting by David Kilgour and David Matas. He said the report clearly tells people how brutal the persecution is in China.

Dr. Lyons said that people have heard a lot about the economic development in China, but the human rights situation has not improved. He expressed that he used to have hope that Chinese leaders would end the persecution, and that pressure from the international community would make the CCP stop. He had thought that the persecution had already reached its worst extreme, but after reading the report on organ harvesting, he realized that the persecution was worse than he thought. He said that the report clearly describes the human right situations in China, and that the authors of the report should be highly praised.

On October 25, 2007, before the Human Rights Torch Relay arrived in Australia, Aedenn Rowan, a famous Australian artist and singer, was interviewed by local media. He said that the Chinese Communist Party and Nazis are essentially the same, although they look different at the surface level. He supported the torch relay and called upon more people to pay attention to it. 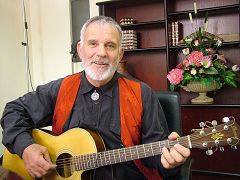 He expressed that he has seen Falun Gong practitioners' group exercises in Sydney and he knows that they are a peaceful group. He was shocked by the persecution, so he decided to speak out for them. He said that practitioners have solid belief; they always smile and have no political agenda. They give people a peaceful feeling. He said he was very sad when he learned about the persecution and the organ harvesting, and can feel the pain that practitioners are suffering.

Mr. Rowan's wife is from Poland, and she experienced life under both Nazi and Russian communist regimes. She said that the Nazi and communist parties are the same, although they look different in their clothes and flags.

Mr. Rowan believes that the CCP will collapse soon. He encourages people to face their fear. He said if people are afraid of the Communist party, then it can do whatever it wants and won't be punished for its brutality. He said Chinese people should have the courage to face the CCP and stand up against it.