On October 20, 2007, Falun Gong practitioners from Sydney took part in the Granny Smith Festival Parade in Eastwood for the seventh time. 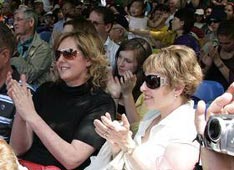 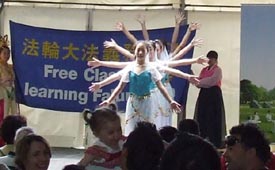 The Granny Smith Festival is one of the biggest events of its kind in north Sydney, drawing more than 80 thousand people every year. It is named after early immigrant Granny Smith, who contributed a lot to the community. This was the 21st annual festival.

Forty groups from different cultures attended the parade. When the Dafa practitioners' group passed by the stage, the host introduced some teachings and principles of Falun Gong to the spectators. Congressmen and the Australian Prime Minister watched the parade and waved to practitioners.

The Divine Land Marching Band led the group. Practitioners demonstrated the exercises and performed traditional Chinese dances and played waist drums. The float was decorated with a banner reading "Truthfulness-Compassion-Forbearance," as well as with apples and lotus flowers.

After the parade, Ms. Su said to the Australian Prime Minister, "Please help to stop the persecution of Falun Gong," and her son gave him a paper lotus flower and Falun Gong truth-clarifying materials.

Many Chinese and Westerners came up to practitioners after the parade and praised their performances.

After the parade, the event organizers arranged stage performances. During their 15 minute segment, practitioners performed a lotus flower dance with music they composed, and demonstrated the Falun Gong exercises in Tang Dynasty style costumes. The spectators warmly welcomed the performances and praised them.

The organizers told practitioners that their performances were excellent and asked them to come again next year. One of the spectators said, "It was very touching. I don't know why, but I cannot hold back my tears. I want to learn the exercises. Please tell me how to start."

Practitioners passed out a lot of materials, and many people asked for more details about Falun Gong. Some groups invited practitioners to give seminars for them.