Having Served the Country with Utmost Loyalty, a Noble Spirit Will Never Perish (Photos)

(Clearwisdom.net) For almost a thousand years, the moving and heroic stories of how Yue Fei served the country with utmost loyalty have been widely spread among the Chinese people. His words "Give back our rivers and mountains" have inspired the sons and daughters of the Chinese nation from generation to generation. The Chinese people highly respect the patriotic spirit Yue Fei demonstrated in recovering lost territory and guarding the country and the people. They are furiously indignant with court official Qin Hui's disgraceful conduct in betraying his country for selfish purposes and framing those who were loyal and upright. 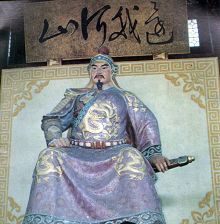 Yue Fei was from Tangyin County in Xiangzhou, Henan Province, during the Southern Song period. He had lofty aspirations since childhood and was diligent and eager to learn. He was adept with both pen and sword. In 1126, the Jurchen Dynasty troops mounted a large-scale invasion into the Central Plain, and the Divine Land was shrouded in the dark clouds of war. Yue Fei joined up and started his military career to fight against the Jurchen invaders and wipe out a national disgrace. Before he set out, his mother tattooed four characters across his back that read, "Serve the country with the utmost loyalty," and told him that he must serve the country with the utmost loyalty throughout his life. This became Yue Fei's tenet, which he adhered to throughout his life. After Yue Fei joined the army he fought very courageously and was quickly promoted. Deputy marshal Zong Ze spoke highly of him saying, "No fine generals from ancient times could match his wisdom, bravery, and talent."

The Jurchen troops invaded Kaifeng City and captured Emperor Huizong and Emperor Qinzong, bringing an end to the Northern Song Dynasty. In the second year of the Reign of Jingkang, the Prince of Kang ascended to the throne and became Emperor Gaozong. He moved the capital city to Lin'an (today's Hangzhou City) and established the Southern Song Dynasty. Yue Fei submitted a written appeal to Emperor Gaozong, asking him to recover the lost territories. The Emperor did not listen and punished him by removing him from his position.

Yue Fei then went to seek refuge with General Zhang Suo in Hebei Province. He was appointed to be a commander in charge of the troops. He fought against the Jurchen invaders around the Taihang Mountains and distinguished himself in action, time and again.

The Jurchen troops commander-in-chief, Wuzhu, again launched an offensive to invade the Southern Song. Du Yun, the garrison commander in Jiankang, surrendered without a fight, and Emperor Gaozong was forced to flee to the sea.

Yue Fei commanded his isolated force to fight the Jurchen troops of Jin behind the enemy lines. First he defeated the rear guard troops of Jin, winning all six battles. When the Jurchen troops attacked Changzhou, Yue Fei led his army to assist the Song troops and won all four battles. The next year Yue Fei ambushed the Jurchen troops in the Niutou Mountains and defeated Jin Wuzhu's army, and recovered Jiankang (today's Nanjing City). The Jurchen troops were forced to retreat. By then, Yue Fei had become a well-known hero in both the north and the south and had gained great fame and prestige. Yue Fei was the commander of an army that numbered in the tens of thousands of soldiers who were well-known for their strict discipline and bravery.

In the third year in Shaoxing, Yue Fei led his troops up north again and recovered six counties, including Xiangyang. He was promoted to the governorship of Qingyuanjun. In the third year of Shaoxing, Yue Fei again led his troops up north and soon took Yiyang, Luoyang, Shangzhou, and Guozhou, and further surrounded the Chen and Cai regions. However, Yue Fei soon realized that his troops were an isolated force, penetrating deep into the enemy's occupied areas. He had neither reinforcements nor sufficient provisions and had to retreat to Ezhou (today's Wuchang City in Hubei Province). During this northern expedition Yue Fei sensed he had not realized his aspirations and wrote his age-old poetic masterpiece - "Man Jiang Hong:"

"My wrath bristles through my helmet, the rain stops as I stand by the rail.
I look up towards the sky and let loose a passionate roar.
At age thirty my deeds are nothing but dust, my journey has taken me over eight thousand li (1).
So do not sit by idly, for young men will grow old in regret.
The humiliation of Jingkang still lingers.
When will the pain of his subjects ever end?
Let us ride our chariots through the Helan Pass.
There we shall feast and drink barbarian flesh and blood.
Let us begin anew to recover our old empire, before paying tribute to the Emperor."

Yue Fei's poem expressed his strong will to serve his country by retaking the lost territories and unifying the Dynasty, so that peace and prosperity could be assured. It also showed his confidence in victory.

Qin Hui had by then already become Jin's agent and took betraying the Southern Song Dynasty as his duty. Yue Fei felt extremely indignant and petitioned the Emperor to allow him to "end his military duties and retreat to the country" as a protest. The next year, Wuzhu tore up the peace agreement and launched a large-scale offensive toward the south. Yue Fei received orders to fight back. He soon recovered Zhengzhou and Luoyang and defeated the crack mounted troops of Jin in Yancheng. He pushed on in the flush of victory and occupied Zhuxianzhen, with Kaifeng City being only 45 kilometers away. Wuzhu was forced to retreat into Kaifeng, and the morale of his troops was extremely low. They sighed, "It's easier to shake Mount Tai than to shake Yue Fei's army," and dared not to fight with Yue Fei's army.

Yue Fei had outstanding strategic skills and commanded his troops with strict discipline. At the same time he cared for and loved the people as his own family members. His troops were known for their exemplary conduct, "Do not pull down a house for firewood, even if we die from cold. Do not rob people, even if we starve to death." Yue Fei personally commanded 126 battles, without even one defeat. He was truly an ever-victorious general.

In Zhuxianzhen, Yue Fei joined forces with General Han Shizhong and a few others, preparing to cross the Yellow River to recover more lost territories and drive straight on to Huanglongfu. Yue Fei said excitedly to the generals, "Let's drive straight on to Huanglongfu and toast together!" Just then, Qin Hui became supremely fearful of Yue Fei's success in his northern expedition. He urged Emperor Gaozong to issue 12 orders in a day to force Yue Fei to retreat. Yue Fei could not restrain his anger and looked up to the sky and sighed deeply, "Ten years of hard work destroyed in a moment! All those recovered cities and towns will be lost in a day! The land of our country--rivers and mountains--will never be revived! Heaven and earth will never be the same again!" When Yue Fei followed orders and retreated, the people in the Central Plain blocked his troops and horses. The sound of wailing could be heard everywhere. Yue Fei could not help weeping himself.

After Yue Fei returned to Lin'an, Qin Hui wanted to murder him. He framed Yue Fei, saying that he, Yue Fei, had conspired against the Dynasty. Qin Hui put Yue Fei in prison and tortured him ruthlessly, attempting to obtain confessions. Yue Fei wrote, "The humiliation of Jingkang is still there, the emperor and court officials were hunting in the north, and the people had become homeless. It was fortunate that our Emperor moved south and settled in Jinling, and was able to re-create heaven and earth. Yet, he does not consider the situation that the two emperors were ignored in the desert, and he connives with his favorite court official to manipulate power for personal ends. I broke an arrow as I made a pledge to meet all generals. The east is linked with islands in the sea. I would follow Li Ji's example to expedite east across the sea. To the south as far as Dianchi, like Zhuge, I would cross the River Lu and penetrate deep. I admire Ban Chao for his achievements in opening up land and territory, and I am envious of Ping Zhong's establishment of cities and fortresses. I want to drive straight on to Huanglong to welcome back the two emperors, and to unify Central China. These have been my aspirations and goals all along. Today, the treacherous court official plots to kill the honest and the loyal, and framed me by saying that I conspired against the court. Heaven is selfless and will punish the treacherous official in the prime minister's residence, and the underworld will make its power felt and capture the judge of Dalisi to verify right and wrong."

Qin Hui could not find any evidence against Yue Fei, so he decided to kill Yue Fei based on a fabricated charge. On the eve of the 1142 New Year, on December 29, Qin Hui and his wife, Wang, carried out a clandestine plot. They wrote an order on a small piece of paper and passed it to the prison guards, ordering them to secretly kill the imprisoned Yue Fei. Before he was killed at Fengbo Pavilion in Dalisi, Yue Fei picked up a brush and wrote eight big characters, "The sky and the sun are all too clear [of my innocence]." Yue Fei's son, Yue Yun, and General Zhang Xian were also killed along with him. Yue Fei was only 39 years old when he died.

Yue Fei's fame was restored only after Song Emperor Xiaozong became enthroned. He was posthumously conferred the title of "King of E."

Yue Fei remained faithful and unyielding to the end of his life. He defeated the Jurchen invaders and safeguarded the Central Plain and Chinese civilization. He laid down his life for a just cause and upheld an ethical code of conduct. Yue Fei's glorious achievements have lasted for thousands of years and are deeply engraved on the minds of the Chinese people.

Artisans fashioned iron statues of treacherous Qin Hui and his accomplices, depicting them kneeling down forever in front of Yue Fei's tomb, with their hands tied behind them. People have for centuries cursed and spat on these statues.

In today's China, evil has appeared again. Jiang Zemin and the Chinese Communist regime are persecuting Falun Gong and more than 100 million good people who believe in "Truthfulness-Compassion-Forbearance." Treacherous Jiang Zemin and the evil Party will also be eternally disgraced and cursed and spat upon. They will go down in history as the byword of infamy for ten thousand years! 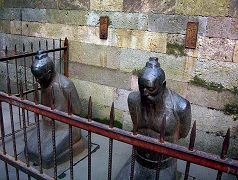 "The Loyal general died an unjust death for his country,

the heavenly laws were clear and took a pity.

He left behind a history of justice,

right and wrong are embedded in the human world for a thousand years."

"Evil Qin Hui will be condemned for ten thousand years,

Loyal Yue Fei is still remembered after a thousand years.

The sun and the moon shine in praise of his bravery,

heaven and earth certify his innocence!"

“An Ordinary Family's Story of Cultivation”