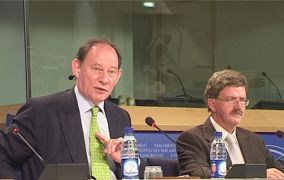 The members of the European Parliament who took part in the conference emphasized that many groups in China suffer persecution even though there are only fourteen months left until the Olympic Games in Beijing. Mr. McMillan-Scott issued an open letter to Dr. Hans-Gert Poettering, President of the European Parliament. The letter discussed the CCP's persecution of religious freedom, especially the persecution of Falun Gong practitioners and those human rights lawyers who have helped practitioners. He specifically mentioned the cases of Falun Gong practitioners Cao Dong and Zhang Lianying and the recent persecution of lawyers Gao Zhisheng and Li Heping.

Mr. McMillan-Scott said that those cases mentioned above and all cases of more than three thousand practitioners who were tortured to death were submitted to the International Criminal Court. He emphasized that the CCP's persecution of religion and belief cannot continue.

Mr. McMillan-Scott attached two annexes - Amnesty International's urgent action on Gao Zhisheng, and his notes of a meeting with a CCP delegation. He expressed clearly that he cannot accept the CCP's persecution of Cao Dong, Zhang Lianying and Gao Zhisheng, and said that he would continuously exert pressure to get their release. The President of the European Parliament wrote to JosÃ© Manuel Barroso, President of the European Commission, and urged the European Commission to pay attention to the situation of Cao Dong, Zhang Lianying and Gao Zhisheng. In his reply, President Barroso expressed that the European Commission cannot accept the unfair treatment of Falun Gong practitioners and would continue to request the CCP regime to stop the persecution of Falun Gong. Based on a suggestion from the International Criminal Court, the European Parliament has submitted a a formal document on the basis of the International Convention on the Prevention and Punishment of the Crime of Genocide.

The Europe-China human rights dialogue will be held on October 15 in Beijing. Mr. McMillan-Scott requested the CCP to release the Falun Gong practitioners mentioned above and attorney Gao Zhisheng. The European Commission will raise these cases in the dialogue.

Following is the original letter from Mr. McMillan-Scott to the President of the European Parliament:

Further to our discussion on religious freedoms in China on 19 September in your Brussels office, I regret to inform you of subsequent developments affecting those with whom I had contact during my visit to Beijing in May 2006. As you know, all were arrested after my visit, harassed by the authorities and in two cases I have recent information that they are being tortured.

Since my meeting with you, the renowned Christian human rights lawyer, Mr Gao Zhisheng, was forcibly removed from his home on 22 September where he had been under house arrest since January, after his conviction last year for 'subversion'. His current whereabouts are unknown and there are fears for his safety (see Amnesty International Alert at Annex I).

On 26 September, I had a meeting in Strasbourg with a delegation from the National People's Congress of China (NPC) at which I handed over the letter that I sent to your office on 25 September stating my concerns over the inhumane treatment of the three individuals with whom I had contact in Beijing - Mr Cao Dong, Ms Zhang Lianying (both Falun Gong practitioners) and Mr Gao Zhisheng, who had advised her. I invited the delegation to seek their immediate freedom and in any event to advise you about their wellbeing, before the EU/China Human Rights Dialogue begins in Beijing on October 15.

I then received an email which informed me that on 29 September the lawyer of Mr Cao Dong, Mr Li Heping (also a Christian) had been seized by security forces and taken to woods where he was beaten up (see Amnesty International alert at Annex II). I can only assume that the treatment of Mr Li Heping is the result of my meeting with the NPC delegation in Strasbourg (see notes of the meeting at Annex III).

I am holding a Press conference on Wednesday 10 October at which religious freedoms in China will be the focus. I intend to release recent correspondence about individual cases, including this letter and annexes.

In addition, I have contacted the Secretariat of the International Criminal Court (ICC) regarding the above cases and some 3,000 religious prisoners who have died since 1999 under torture in China. The ICC has suggested that an official from the European Parliament's Human Rights Unit should be seconded to prepare a dossier for submission under the Genocide Convention.

I am sure you will agree that the repression of religious freedoms in China, whether of Buddhists, Christians, or Muslims, or in countries such as Burma or Sudan which fall under China's sphere of influence, cannot continue, and I look forward to further contacts with your office on this matter.

“An Awakened Family Resists the Persecution with Upright Thoughts”