Australia: Supreme Court of New South Wales Clears the Way to a Default Trial if Bo Xilai Continues Ignoring the Lawsuit Brought Against Him (Photos)

The New South Wales Supreme Court in Sydney, Australia, held a preliminary hearing on October 8, 2007, into the lawsuit charging Chinese Minister of Commerce Bo Xilai with torture. Plaintiff's attorney Andrew attended and stated the lawsuit had been delivered to Bo on September 4 during the APEC summit. The defendant failed to respond, either in person or via counsel. The court agreed that the plaintiff's attorney could request a default trial if the plaintiff fails to respond by the next hearing, scheduled for November 5, 2007.

During Bo's tenure as governor of Liaoning Province, large jails were built to hold Falun Gong practitioners, and practitioners were tortured and brainwashed using a multitude of cruel and bloody means. The organ harvesting atrocities were first exposed at Sujiatun, a secret concentration camp in Liaoning Province, where thousands of Falun Gong practitioners were held as a living organ bank, having their organs harvested and facing immediate cremation to destroy evidence. Bo Xilai can not escape responsibility for his involvement.

Plaintiff Pan Yu was thrown into the Longshan Forced Labor Camp in Liaoning Province for practicing Falun Gong in 2000. He was brutally tortured and beaten with 40,000 volt electric batons. He almost lost his mind and life.

Pan Yu said, "The Masanjia Labor Camp, the Dabei Jail of Shenyang, the Longshan Labor Camp of Shenyang, the Zhangshi Labor Camp and the Sujiatun Concentration Camp were the most notorious in the nation for persecution of Falun Gong. All of them are in Liaoning Province. The hands of its former governor are covered with blood. We must bring him to justice." 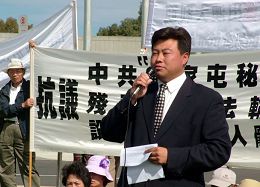 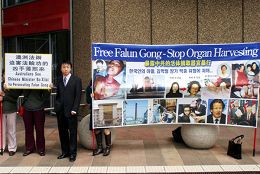 Mr. Newton, legal counsel for the plaintiffs, told reporters that the plaintiff would request a default trial against Bo if he continued to ignore the lawsuit. Mr. Newton called the progress very encouraging. The defendant can not free himself from the punishment of law. The progress of the lawsuit would console and support the plaintiff and the Falun Gong practitioners under persecution in China and give a serious warning to the defendant and those Chinese officials who actively followed Jiang Zemin in the persecution of Falun Gong. If they don't stop the persecution immediately, they will not be freed from punishment. Mr. Newton and the plaintiff expressed their gratitude to Andrew and other human rights lawyers who quietly put in huge amounts of work to push the lawsuit forward.

In April 2006, when Bo Xilai visited Australia with the Chinese Prime Minister Wen Jiabo, Pan Yu, an Australian citizen and a Falun Gong practitioner, filed a lawsuit against him for torture. On the evening of September 4, 2007, Falun Gong practitioners Jonathan and Gary delivered the lawsuit papers to Bo as he arrived in Canberra for APEC. The lawsuit delivered to Bo this time is an updated version of the one in 2006.

Two other lawsuits against chief perpetrators of the persecution of Falun Gong have also made progress in requests for default trial. The lawsuit filed by Australian artist Zhang Cuiying against the chief perpetrator of the persecution, Jiang Zemin, and the lawsuit against the 610 Office and Luo Gan were successfully delivered with the help of the Australian Department of Foreign Affairs and the Chinese Embassy. If the defendants fail to respond by the end of October, Ms. Zhang will request a default trial. The lawsuit by Falun Gong practitioners Xie Yan and Li Fuying against Chen Shaoji, head of the 610 Office and deputy secretary of the Chinese Communist Party Committee in Guangdong Province, was delivered in December, 2006. The defendant failed to respond to the Court. With the permission of the Court, the plaintiffs' legal counsel is busy preparing a request for a default trial.

More than seventy lawsuits have been filed around the world against high-ranking Chinese officials Jiang Zemin, Luo Gan, Bo Xilai, Zhou Yongkang and others for crimes against humanity and torture in the U.S., the U.K., Canada, Germany, Ireland, Australia and other countries.