On October 8, 2007, the annual Thanksgiving celebration parade was held in Waterloo, Ontario, Canada. About 300,000 people joined the celebration. The Toronto Divine Land Marching Band, composed of more than 120 Falun Gong practitioners, was the only Chinese group invited to the parade. 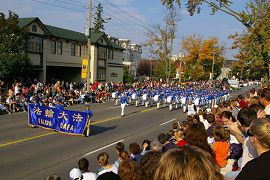 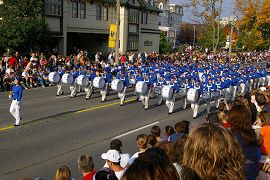 The Toronto Divine Land Marching Band standing out in the sunshine 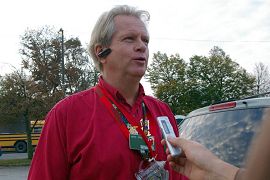 Mark Sindens, coordinator of the parade, welcomed the band to the parade 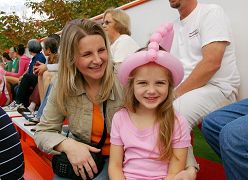 Jacqueline Schmidt, resident of Waterloo, and her six-year-old daughter Sophie watching the parade 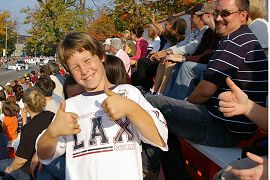 Drew Elle, an 11-year-old elementary school student, told the reporter, "I really like the Divine Land Marching Band. They are awesome."

A young couple from Shanghai watched the parade. The pregnant wife tried to get to the front row to take pictures of the band while saying, "Great! Magnificent!" 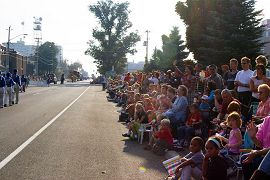 A woman waved at the band and told the reporter the band did very well; she was proud of them

Before the parade started, the reporter interviewed the coordinator of the parade, Mark Sinden. Sinden introduced the parade as the second largest Thanksgiving parade in the world (the one in Germany is the largest.) This year there were 50 floats and 16 marching bands participating.

"I welcome Falun Gong's band to join us for the first time," said Sinden. "Many people saw their performance at the Beer Festival Parade in St. Catherines and were amazed. I believe we will have an even better performance today."

The Spirit of Persistence

The Divine Land Marching Band played "Falun Dafa Is Good," "Fa Drums and Fa Trumpets," and "The Maple Leaf Forever." The audience danced and clapped along to the music.

Jacqueline Schmidt, a resident of Waterloo, and her six-year-old daughter, Sophie, watched the parade. When they saw the reporter taking pictures of the band, Jacqueline told the reporter, "The band is grand and magnificent. The color of their uniforms looks really nice under the sun. I hope they come every year." Sophie immediately added that she liked the performance, too.

Mark and his family drove three hours from Windsor to see the parade. Mark told the reporter that in such warm weather, the Divine Land Marching Band never stopped playing, "I can feel their persistent spirit from their red cheeks and the sweat on their faces."

A volunteer was very touched by the band, whose members never stopped playing from beginning to end.

Many Chinese spectators smiled and waved at the band as they passed by. A lady who sat in a chair stood up when the band passed by and waved vigorously at them. She told the reporter that the band did great, "I am so proud of them."

A senior Chinese lady frequently clapped when she saw the band perform. She told the reporter the band's performance was extremely beautiful.

A young couple from Shanghai watched the parade. The pregnant wife tried to get to the front row to take pictures of the band while saying, "Great! Magnificent!"

"The Chinese government is doing an ugly thing."

Graham Moogk-Soulis, a student studying history at the University of Waterloo, said, "This is the first time I have seen a performance of the Divine Land Band. I am very impressed with their style. I know of Falun Gong because I have seen them exercise in the parks. They appear in parades elsewhere and participate in multicultural events in the community. They are nice and peaceful. I know about the brutal persecution in China from the news. I think the Chinese government is doing an ugly thing by persecuting a group of peaceful people."

After learning the band was only established last year, Graham said, "This is unbelievable. Their performance is so beautiful!"

“Mr. Xiao Zhixiang, 67, on the Brink of Death in Chishan Prison, Hunan Province”