(Clearwisdom.net) A series of events to celebrate the 230th anniversary of Stavropoly City were held on September 29 and 30, 2007. . Falun Gong practitioners were invited to participate in the celebration in Pobed Park for two days. 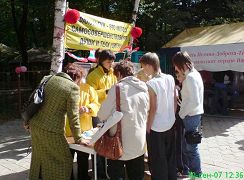 Wearing yellow costumes, Falun Gong practitioners demonstrated the five sets of exercises to residents participating in the activities. In the meantime, they showed visitors how to fold paper lotus flowers at a booth nearby. They took advantage of this opportunity to introduce visitors to the spirit of Falun Gong practitioners', which is like the lotus flower that never gets dirty though it rises out of the mud. They also told the visitors touching stories about practitioners' clarification of the truth with great compassion and tolerance, and the persecution by the Communist regime in China.

Through participating in the city' anniversary celebrations in this special way, practitioners have brought Falun Dafa's magnificence to this city. They were warmly welcomed by local residents. After the event was over, Stavropoly City's Cultural and Recreational Park Administration issued a special recognition letter to the Falun Gong practitioners in appreciation of their participation. The letter stated: "Your performance has made our anniversary celebrations more wonderful, and left a clear impression on the visitors participating in the activities. People were overwhelmed by your righteous energy." 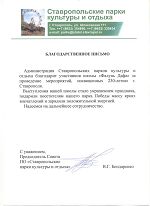